She Persisted in Science: Brilliant Women Who Made a Difference 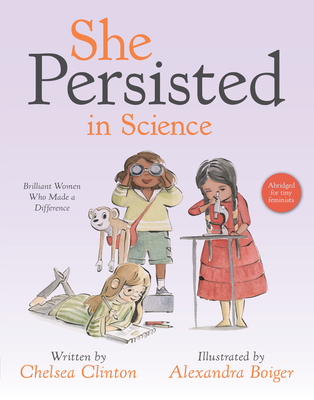 She Persisted in Science: Brilliant Women Who Made a Difference

By  Chelsea Clinton , Illustrated By  Alexandra Boiger
Board book
$ 9.99
Likely On Our Shelves

A STEM-focused addition to the #1 New York Times bestselling She Persisted series!

Throughout history, women have been told that science isn’t for them. They’ve been told that they’re not smart enough, or that their brains just aren’t able to handle it. In this book, Chelsea Clinton introduces readers to women scientists who didn’t listen to those who told them “no” and who used their smarts, their skills and their persistence to discover, invent, create and explain.

She Persisted in Science is for everyone who’s ever had questions about the world around them or the way things work, and who won’t give up until they find their answers.

With engaging artwork by Alexandra Boiger accompanying the inspiring text, this is a book that shows readers that everyone has the potential to make a difference, and that women in science change our world.

Praise for She Persisted:

* “[A] lovely, moving work of children’s literature [and a] polished introduction to a diverse and accomplished group of women.” —Publishers Weekly, starred review

“Exemplary . . . This well-curated list will show children that women’s voices have made themselves emphatically heard.” —Booklist

“[She Persisted] will remind little girls that they can achieve their goals if they don’t let obstacles get in the way.” —Family Circle

“We can’t wait to grab a copy for some of the awesome kids in our lives . . . and maybe some of the grown-ups, too.” —Bustle

“A message we all need to hear.” —Scary Mommy

Praise for She Persisted in Science:

Chelsea Clinton is the #1 New York Times bestselling author of She Persisted, She Persisted Around the World, She Persisted in Sports, She Persisted in Science, Don't Let Them Disappear, It's Your World and Start Now!, as well as Grandma's Gardens and The Book of Gutsy Women, which she wrote with Hillary Clinton, and Governing Global Health with Devi Sridhar. Chelsea earned a master’s degree in public health from Columbia University’s Mailman School of Public Health, where she is now an adjunct assistant professor, and a PhD in international relations from Oxford University. She is also the Vice Chair of the Clinton Foundation, where she works on many initiatives, including those that help empower the next generation of leaders. She lives in New York City with her husband, Marc, their three children and their dog, Soren.

Alexandra Boiger (www.alexandraboiger.com) has illustrated nearly twenty picture books, including the She Persisted books by Chelsea Clinton; the popular Tallulah series by Marilyn Singer; All of Us by Kathryn Erskine; and the Max and Marla books, which she also wrote. Originally from Munich, Germany, she now lives outside of San Francisco, California, with her husband, Andrea, daughter, Vanessa, and two cats, Luiso and Winter. Follow Alexandra on Instagram @alexandra_boiger.