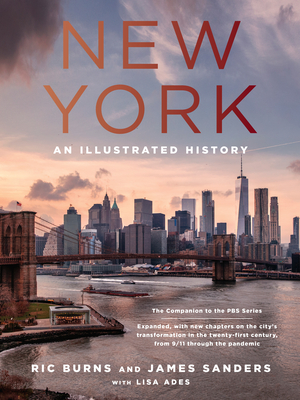 An expanded edition of the only comprehensive illustrated history of New York—with more than 600 ravishing photographs and illustrations—that tells the remarkable 400-year-long story of the city from its beginning in 1624 up to the current moment. The companion volume to the acclaimed PBS series.

This landmark book traces the spectacular growth of New York from its initial settlement on the tip of Manhattan through the destruction wrought by the Revolutionary War to its rise as the nation’s premier commercial capital and industrial center and as a magnet for immigrant hopes and dreams in the 19th century to its standing as a beacon  of modern culture in the 20th century and as a worldwide symbol of resilience in the 21st century.

The story continues here with new chapters delivering a sweeping portrait of New York at the dawn of the 21st century, when it emerged after decades of decline to assert its place at the very center of a new globalized culture. Here  is a city challenged—indeed, sometimes shaken to its core—by a series of profound crises: the aftermath of 9/11, the continual struggle with racial injustice, the financial crisis of 2008, the devastation of Superstorm Sandy, the still unfolding cataclysm of the COVID-19 pandemic—whose earliest and deadliest urban epicenter was New York itself. Here too is a lively portrait of the city’s vibrant street life and culture: the birth of hip-hop in the South Bronx, Christo and Jeanne-Claude’s Gates in Central Park, the musicals of Broadway, the explosion in location filmmaking in every borough, the pivotal rise of the tech industry, and so much more.

The history of this city—especially in the tumultuous and transformative two decades detailed in the new chapters—is an epic story of rebirth and growth, an astonishing transfiguration, still in progress, of the world’s first modern city into a model and prototype for the global city of the future.

RIC BURNS is a documentary filmmaker best known for directing the award-winning PBS series New York, which he wrote with James Sanders. He is also known for his work on The Civil War, which he produced with his brother, Ken. Since 1990, he has directed nearly fifty hours of prime-time programming for PBS, and the films have received seven Emmy Awards, three Alfred I. duPont–Columbia University Awards, and two Peabody Awards, among others.

JAMES SANDERS is an architect, author, and filmmaker, who, with Ric Burns, wrote the acclaimed eight-part PBS series New York. His landmark study of the city and film, Celluloid Skyline: New York and the Movies, won a Theatre Library Association Award. He has written for The New York Times, Los Angeles Times, and Vanity Fair, and has also received a Guggenheim Fellowship and an Emmy Award.

LISA ADES is a documentary filmmaker who has produced and directed films for PBS and cable television for thirty years. Her acclaimed film Miss America premiered at the Sundance Film Festival before its broadcast on PBS in 2002. She has also produced award-winning films with Ric Burns, including the first five episodes of New York.