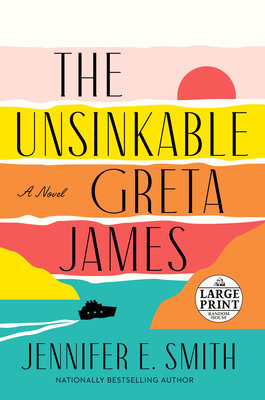 An indie musician reeling from tragedy and a public breakdown reconnects with her father on a weeklong cruise in “a pitch-perfect story about the ways we recover love in the strangest places” (Rebecca Serle, bestselling author of In Five Years)

“The characters are drawn with a generosity that allows them to be wrong but also right, loving but also prone to missteps, and ultimately deserving of a resolution that’s full of hope.”—Linda Holmes, New York Times bestselling author of Flying Solo

ONE OF THE BEST BOOKS OF THE YEAR: She Reads

Right after the sudden death of her mother—her first and most devoted fan—and just before the launch of her high-stakes sophomore album, Greta James falls apart on stage. The footage quickly goes viral and she stops playing, her career suddenly in jeopardy—the kind of jeopardy her father, Conrad, has always predicted; the kind he warned her about when he urged her to make more practical choices with her life.

Months later, Greta—still heartbroken and very much adrift—reluctantly agrees to accompany Conrad on the Alaskan cruise her parents had booked to celebrate their fortieth anniversary. It could be their last chance to heal old wounds in the wake of shared loss. But the trip will also prove to be a voyage of discovery for them both, and for Ben Wilder, a charming historian, onboard to lecture about The Call of the Wild, who is struggling with a major upheaval in his own life. As Greta works to build back her confidence and Ben confronts an uncertain future, they find themselves drawn to and relying on each other.

It’s here in this unlikeliest of places—at sea, far from the packed city venues where she usually plays and surrounded by the stunning scenery of Alaska—Greta will finally confront the choices she’s made, the heartbreak she’s suffered, and the family hurts that run deep. In the end, she’ll have to decide what her path forward might look like—and how to find her voice again.

Jennifer E. Smith is the author of nine books for young adults, including The Statistical Probability of Love at First Sight and Hello, Goodbye and Everything in Between, both of which have been adapted for film. She earned a master’s degree in creative writing from the University of St. Andrews in Scotland, and her work has been translated into thirty-three languages. She currently lives in Los Angeles.