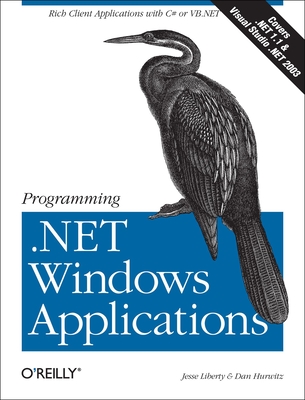 For those of you who develop standalone Windows applications for PCs and other devices, Microsoft's .NET Windows Forms provide a much better way to get it done. This new technology gives you more power and flexibility for a fraction of the effort compared to classic Win32 development, with a streamlined programming model that deals automatically with many tedious details that once plagued developers.As with most things .NET, the only hitch is the learning curve. But that's where acclaimed author Jesse Liberty makes the difference with Programming .NET Windows Applications. With this tutorial, you will explore all aspects of using .NET Windows Forms class libraries and the associated programming tools in Visual Studio .NET, enabling you to build applications for the Windows 9x, Windows 2000 and Windows XP desktop platforms. Step-by-step, you'll learn ways to design applications that either function alone on a PC, or work in combination with your web-based application server to take advantage of the richer interface and higher level of security.The book also explains how your new Windows applications can sidestep problems that used to arise from the use of DLLs (known collectively as DLL hell), and how .NET Windows Forms can be used as an alternative to ASP.NET and browser-based approaches for building web application clients.Jesse Liberty definitely knows his stuff when it comes to the .NET platform. As the author of O'Reilly's Programming C# and Learning Visual Basic .NET, he's well-known for his clear and concise style that prompted one reviewer to say, It's as if he knows exactly what questions I'm going to ask ahead of time. Jesse also co-authored Programming ASP.NET with contract programmer Dan Hurwitz, and now the two have teamed up again to bring you this comprehensive tutorial--without a doubt, the best source available for learning how to program with .NET Windows Forms.

Jesse Liberty is the best selling author of Programming ASP.NET, Programming C#, and a dozen other books on web and object oriented programming. He is president of Liberty Associates, Inc., where he provides contract programming, consulting and on-site training in ASP.NET, C#, C++ and related topics. Jesse has been a Distinguished Software Engineer at AT&T and Vice President for technology development at CitiBank.Dan Hurwitz is the president of Sterling Solutions, Inc., where for nearly two decades he has been providing contract programming and database development to a wide variety of clients.