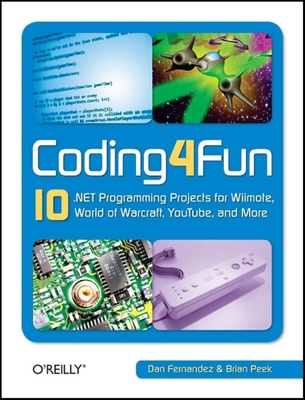 How would you like to build an Xbox game, use your Nintendo Wiimote to create an electronic whiteboard, or build your own peer-to-peer application? Coding4Fun helps you tackle some cool software and hardware projects using a range of languages and free Microsoft software. Now you can code for fun with C#, VB, ASP.NET, WPF, XNA Game Studio, Popfly, as well as the Lua programming language.

If you love to tinker, but don't have time to figure it all out, this book gives you clear, step-by-step instructions for building ten creative projects, including:

The perfect gift for any developer, Coding4Fun shows you how to use your programming skills in new and fun ways.

This book is amazing The scope is so wonderfully broad that anyone who has an interest in designing games at any level should read this book.

Dan Fernandez is an Evangelism Manager in the Developer and Platform Evangelism team at Microsoft. Dan has been with Microsoft since July 2001, working in multiple roles including the Lead Product Manager for Visual Studio Express and Popfly, the Visual C# Product Manager, and as a Developer Evangelist in the Mid-Atlantic district. Prior to joining Microsoft, he worked as a developer at several consulting firms including IBM Global Services specializing in web-based and mobile application development. Dan is also the co-creator of Coding4Fun and works on fun open source projects in his spare time. You can read more about Dan on his blog at http: //blogs.msdn.com/danielfe/.Brian Peek is a Senior Developer at ASPSOFT, Inc., and a Microsoft C# MVP who has been actively developing in .NET since its early betas, but has been developing solutions using Microsoft technologies and platforms for even longer. Along with .NET, Brian is particularly skilled in the languages of C, C++ and assembly language for a variety of CPUs. He is also well-versed in a wide variety of technologies including web development, document imaging, GIS, graphics, game development, and hardware interfacing. Brian has a strong background in developing applications for the health-care industry, as well as developing solutions for portable devices, such as tablet PCs and PDAs. Additionally, Brian previously co-authored the book Debugging ASP.NET and currently writes for MSDN's Coding4Fun website. You can reach Brian via his blog at http: //www.brianpeek.com/ .