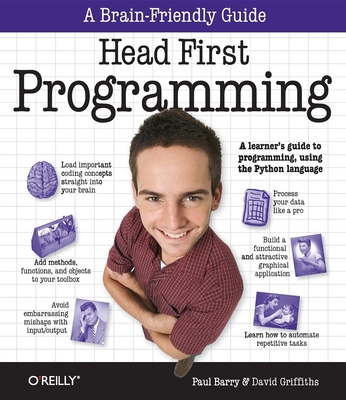 Looking for a reliable way to learn how to program on your own, without being overwhelmed by confusing concepts? Head First Programming introduces the core concepts of writing computer programs -- variables, decisions, loops, functions, and objects -- which apply regardless of the programming language. This book offers concrete examples and exercises in the dynamic and versatile Python language to demonstrate and reinforce these concepts.

Learn the basic tools to start writing the programs that interest you, and get a better understanding of what software can (and cannot) do. When you're finished, you'll have the necessary foundation to learn any programming language or tackle any software project you choose.

With a focus on programming concepts, this book teaches you how to:

We think your time is too valuable to waste struggling with new concepts. Using the latest research in cognitive science and learning theory to craft a multi-sensory learning experience, Head First Programming uses a visually rich format designed for the way your brain works, not a text-heavy approach that puts you to sleep.

David Griffiths began programming at age 12, after being inspired by a documentary on the work of Seymour Papert. At age 15 he wrote an implementation of Papert's computer language LOGO. After studying Pure Mathematics at University, he began writing code for computers and magazine articles for humans and he currently works in the UK, helping people to create simpler, more valuable software. He spends his free time traveling and time with his lovely wife, Dawn.Paul Barry is formally educated and trained in Computer Science and holds a Masters Degree in Computing Science. He has been programming professionally, on and off, for close to 25 years. Paul already has two textbooks to his name, and is also a Contributing Editor to Linux Journal magazine. His day job is with the Institute of Technology, Carlow in Ireland where he has spent over a decade preparing Ireland's next generation of computing folk to be productive in the workforce. His role as a third level educator affords him the opportunity to explore, learn and teach the very latest programming technologies and practices, which is something that he enjoys even though he knows this makes him a bonafide geek. Paul lives just outside the town of Carlow in Ireland with his wife, two sons, daughter, dog and cat. There's a bunch of computers and a growing collection of music instruments in the house, too (and like a lot of the Head First family, Paul is a struggling guitarist trapped inside a geek's body). He has so far resisted any suggestion that the family acquire a hamster ... or a set of drums.