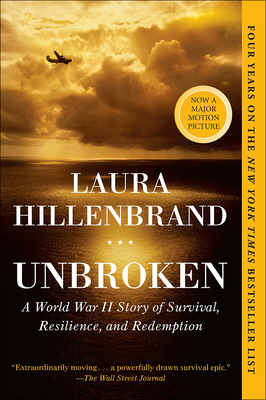 #1 "NEW YORK TIMES" BESTSELLER - SOON TO BE A MAJOR MOTION PICTURE - Look for special features inside. Join the Random House Reader's Circle for author chats and more.
On a May afternoon in 1943, an Army Air Forces bomber crashed into the Pacific Ocean and disappeared, leaving only a spray of debris and a slick of oil, gasoline, and blood. Then, on the ocean surface, a face appeared. It was that of a young lieutenant, the plane's bombardier, who was struggling to a life raft and pulling himself aboard. So began one of the most extraordinary odysseys of the Second World War.
The lieutenant's name was Louis Zamperini. In boyhood, he'd been a cunning and incorrigible delinquent, breaking into houses, brawling, and fleeing his home to ride the rails. As a teenager, he had channeled his defiance into running, discovering a prodigious talent that had carried him to the Berlin Olympics and within sight of the four-minute mile. But when war had come, the athlete had become an airman, embarking on a journey that led to his doomed flight, a tiny raft, and a drift into the unknown.
Ahead of Zamperini lay thousands of miles of open ocean, leaping sharks, a foundering raft, thirst and starvation, enemy aircraft, and, beyond, a trial even greater. Driven to the limits of endurance, Zamperini would answer desperation with ingenuity; suffering with hope, resolve, and humor; brutality with rebellion. His fate, whether triumph or tragedy, would be suspended on the fraying wire of his will.
In her long-awaited new book, Laura Hillenbrand writes with the same rich and vivid narrative voice she displayed in "Seabiscuit." Telling an unforgettable story of a man's journey into extremity, "Unbroken" is a testament to the resilience of the human mind, body, and spirit.
Hailed as the top nonfiction book of the year by "Time" magazine - Winner of the "Los Angeles Times" Book Prize for biography and the Indies Choice Adult Nonfiction Book of the Year award
"Extraordinarily moving . . . a powerfully drawn survival epic."--"The Wall Street Journal"
" "
" A] one-in-a-billion story . . . designed to wrench from self-respecting critics all the blurby adjectives we normally try to avoid: It is amazing, unforgettable, gripping, harrowing, chilling, and inspiring.""--New York"""
"Staggering . . . mesmerizing . . . Hillenbrand's writing is so ferociously cinematic, the events she describes so incredible, you don't dare take your eyes off the page."--"People"
" "
"A meticulous, soaring and beautifully written account of an extraordinary life.""--The Washington Post"
" "
"Ambitious and powerful . . . a startling narrative and an inspirational book.""--The New York Times Book Review"
" "
"Marvelous . . . "Unbroken" is wonderful twice over, for the tale it tells and for the way it's told. . . . It manages maximum velocity with no loss of subtlety."--"Newsweek"
"Moving and, yes, inspirational . . . Laura] Hillenbrand's unforgettable book . . . deserve s] pride of place alongside the best works of literature that chart the complications and the hard-won triumphs of so-called ordinary Americans and their extraordinary time."--Maureen Corrigan, "Fresh Air"
"Hillenbrand . . . tells this] story with cool elegance but at a thrilling sprinter's pace."--"Time.

Laura Hillenbrand""is the author of the #1 "New York Times" bestseller "Seabiscuit: An American Legend, "which was a finalist for the National Book Critics Circle Award, won the Book Sense Book of the Year Award and the William Hill Sports Book of the Year Award, landed on more than fifteen best-of-the-year lists, and inspired the film "Seabiscuit, "which was nominated for seven Academy Awards, including Best Picture. Hillenbrand's "New Yorker" article, "A Sudden Illness," won the 2004 National Magazine Award, and she is a two-time winner of the Eclipse Award, the highest journalistic honor in Thoroughbred racing. She and actor Gary Sinise are the co-founders of Operation International Children, a charity that provides school supplies to children through American troops. She lives in Washington, D.C.