The Education of Laura Bridgman: First Deaf and Blind Person to Learn Language 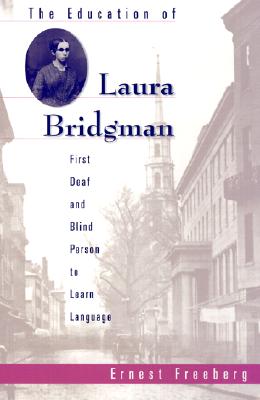 The Education of Laura Bridgman: First Deaf and Blind Person to Learn Language

In the mid-nineteenth century, Laura Bridgman, a young child from New Hampshire, became one of the most famous women in the world. Philosophers, theologians, and educators hailed her as a miracle, and a vast public followed the intimate details of her life with rapt attention. This girl, all but forgotten today, was the first deaf and blind person ever to learn language.

Laura's dark and silent life was transformed when she became the star pupil of the educational crusader Dr. Samuel Gridley Howe. Against the backdrop of an antebellum Boston seething with debates about human nature, programs of moral and educational reform, and battles between conservative and liberal Christians, Freeberg tells this extraordinary tale of mentor and student, scientist and experiment. Under Howe's constant tutelage, Laura voraciously absorbed the world around her, learning to communicate through finger language, as well as to write with confidence. Her remarkable breakthroughs vindicated Howe's faith in the power of education to overcome the most terrible of disabilities. In Howe's hands, Laura's education became an experiment that he hoped would prove his own controversial ideas about the body, mind, and soul. Poignant and hopeful, The Education of Laura Bridgman is both a success story of how a sightless and soundless girl gained contact with an ever-widening world, and also a cautionary tale about the way moral crusades and scientific progress can compromise each other. Anticipating the life of Helen Keller a half-century later, Laura's is a pioneering story of the journey from isolation to accomplishment, as well as a window onto what it means to be human under the most trying conditions.