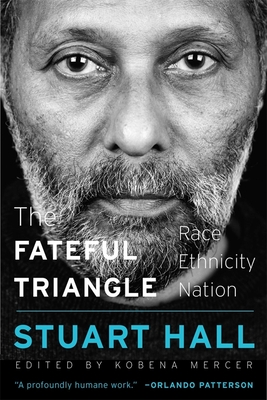 "Hall's main argument rests on the notion that the greatest problem of the 21st century is living with and understanding differences."
--Times Higher Education

"In this long-awaited work, Stuart Hall...bracingly confronts the persistence of race--and its confounding liberal surrogates, ethnicity and nation...This is a profoundly humane work that...finds room for hope and change."
--Orlando Patterson "Marked by struggle and sobriety, this important work makes a significant contribution to a vision of community and an ethics of solidarity."
--Homi K. Bhabha "Essential reading for those seeking to understand Hall's tremendous impact on scholars, artists, and filmmakers on both sides of the Atlantic."
--Artforum "Given the current political conditions, these lectures on race, ethnicity, and nation...may be even more timely today."
--Angela Y. Davis, University of California, Santa Cruz In The Fateful Triangle--drawn from lectures delivered at Harvard University in 1994--one of the founding figures of cultural studies reflects on the divisive, often deadly consequences of the politics of identity. Migration was at the heart of Hall's diagnosis of the global predicaments taking shape around him. Explaining more than two decades ago why migrants are the target of new nationalisms, Hall's prescient vision helps us to understand today's crisis of liberal democracy. As he challenges us to find sustainable ways of living with difference, Hall gives us the concept of diaspora as a metaphor, redefining nation, race, and identity in the twenty-first century.