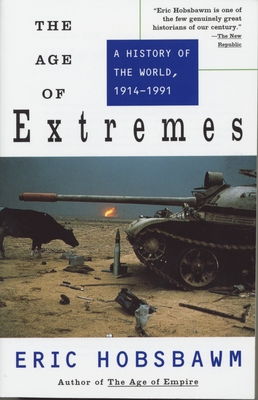 By  Eric Hobsbawm
Paperback
$ 21.00
Out of Stock In Store (Available to Order)

Dividing the century into the Age of Catastrophe, 1914–1950, the Golden Age, 1950–1973, and the Landslide, 1973–1991, Hobsbawm marshals a vast array of data into a volume of unparalleled inclusiveness, vibrancy, and insight, a work that ranks with his classics The Age of Empire and The Age of Revolution.
In the short century between 1914 and 1991, the world has been convulsed by two global wars that swept away millions of lives and entire systems of government. Communism became a messianic faith and then collapsed ignominiously.  Peasants became city dwellers, housewives became workers—and, increasingly leaders.  Populations became literate even as new technologies threatened to make print obsolete.  And the driving forces of history swung from Europe to its former colonies.

Born in 1917, Eric Hobsbawm was educated in Austria, Germany, and England.  He was Emeritus Professor of history at Birbeck College, University of London, and Emeritus Universtiy Professor of politics and socity at the New School for Social Research.  He is the author of more than fourteen books, including The Age of Capital, The Age of Revolution, The Age of Empire, and The Jazz Scene. He died in 2012.