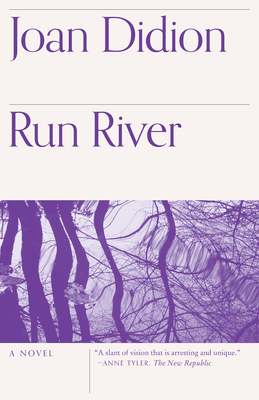 By  Joan Didion
Paperback
$ 17.00
Out of Stock In Store (Available to Order)

The iconic writer's electrifying first novel is a story of marriage, murder and betrayal that only she could tell with such nuance, sympathy, and suspense—from the bestselling, award-winning author of The Year of Magical Thinking and Let Me Tell You What I Mean.

Everett McClellan and his wife, Lily, are the great-grandchildren of pioneers, and what happens to them is a tragic epilogue to the pioneer experience—a haunting portrait of a marriage whose wrong turns and betrayals are at once absolutely idiosyncratic and a razor-sharp commentary on the history of California.

JOAN DIDION was born in Sacramento in 1934 and graduated from the University of California, Berkeley, in 1956. After graduation, Didion moved to New York and began working for Vogue, which led to her career as a journalist and writer. Didion published her first novel, Run River, in 1963. Didion’s other novels include A Book of Common Prayer (1977), Democracy (1984), and The Last Thing He Wanted (1996).

In 2005, Didion was awarded the American Academy of Arts & Letters Gold Medal in Criticism and Belles Letters. In 2007, she was awarded the National Book Foundation’s Medal for Distinguished Contribution to American Letters. A portion of National Book Foundation citation read: "An incisive observer of American politics and culture for more than forty-five years, Didion’s distinctive blend of spare, elegant prose and fierce intelligence has earned her books a place in the canon of American literature as well as the admiration of generations of writers and journalists.” In 2013, she was awarded a National Medal of Arts and Humanities by President Barack Obama, and the PEN Center USA’s Lifetime Achievement Award.

Didion said of her writing: "I write entirely to find out what I’m thinking, what I’m looking at, what I see and what it means.” She died in December 2021.