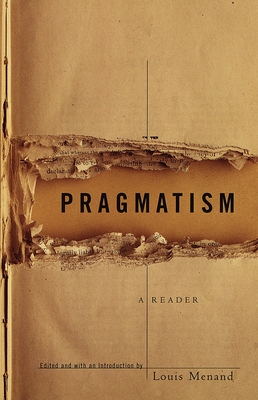 Here are the major texts of American pragmatism, from William James, John Dewey, Oliver Wendell Holmes, and Charles Sanders Peirce to Cornell West, Richard Rorty, Hilary Putnam, Richard Posner, and Richard Poirier, now collected and reprinted unabridged. All are remarkable for the wit and vigor of their prose and the mind-clearing force of their ideas. They reflect the vital role that pragmatism has played in almost every area of American intellectual and cultural life, inspiring judges, educators, politicians, poets, and social prophets. Edited and introduced by Louis Menand, Pragmatism: A Reader is an invaluable resource—and an absorbing read—for everyone who is interested in American culture.

Louis Menand is Professor of English at Harvard. His book The Metaphysical Club (2001) won the Pulitzer Prize in History, the Francis Parkman Prize, and the Heartland Prize for Nonfiction. He is also the author of American Studies (2002) and Discovering Modernism: T.S. Eliot and His Context 91987; new edition 2004) and the editor of The Future of Academic Freedom (1996). He was contributing editor of The New York Review of Books from 1994 to 2001. Since 2001, he has been a staff writer at The New Yorker.