Trust: The Social Virtues and the Creation of Prosperity 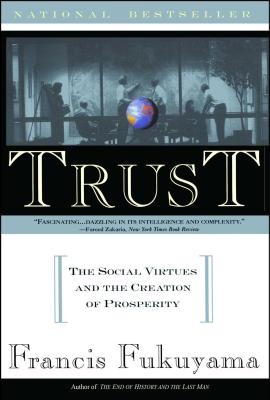 Trust: The Social Virtues and the Creation of Prosperity

In his bestselling The End of History and the Last Man, Francis Fukuyama argued that the end of the Cold War would also mean the beginning of a struggle for position in the rapidly emerging order of 21st-century capitalism. In Trust, a penetrating assessment of the emerging global economic order "after History," he explains the social principles of economic life and tells us what we need to know to win the coming struggle for world dominance.
Challenging orthodoxies of both the left and right, Fukuyama examines a wide range of national cultures in order to divine the underlying principles that foster social and economic prosperity. Insisting that we cannot divorce economic life from cultural life, he contends that in an era when social capital may be as important as physical capital, only those societies with a high degree of social trust will be able to create the flexible, large-scale business organizations that are needed to compete in the new global economy.
A brilliant study of the interconnectedness of economic life with cultural life, Trust is also an essential antidote to the increasing drift of American culture into extreme forms of individualism, which, if unchecked, will have dire consequences for the nation's economic health.

Francis Fukuyama is a Senior Fellow at the Freeman Spogli Institute for International Studies (FSI) at Stanford University, and Mosbacher DIrector of FSI's Center on Democracy, Development, and the Rule of Law. Dr. Fukuyama has written about questions concerning governance, democratization, and international political economy. His book The End of History and the Last Man has appeared in over twenty foreign editions. His most recent books are The Origins of Political Order: From Prehuman Times to the French Revolution, and Political Order and Political Decay: From the Industrial Revolution to the Globalization of Democracy.