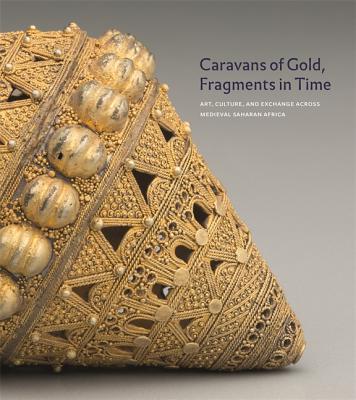 By  Kathleen Bickford Berzock
$ 65.00
Out of Stock In Store (Available to Order)

The Sahara Desert was a thriving crossroads of exchange for West Africa, North Africa, the Middle East, and Europe in the medieval period. Fueling this exchange was West African gold, prized for its purity and used for minting currencies and adorning luxury objects such as jewelry, textiles, and religious objects. Caravans made the arduous journey by camel southward across the Sahara carrying goods for trade--glass vessels and beads, glazed ceramics, copper, books, and foodstuffs, including salt, which was obtained in the middle of the desert. Northward, the journey brought not only gold but also ivory, animal hides and leatherwork, spices, and captives from West Africa forced into slavery. Caravans of Gold, Fragments in Time draws on the latest archaeological discoveries and art historical research to construct a compelling look at medieval trans-Saharan exchange and its legacy. Contributors from diverse disciplines present case studies that form a rich portrayal of a distant time. Topics include descriptions of key medieval cities around the Sahara; networks of exchange that contributed to the circulation of gold, copper, and ivory and their associated art forms; and medieval glass bead production in West Africa's forest region. The volume also reflects on Morocco's Gnawa material culture, associated with descendants of West African slaves, and movements of people across the Sahara today. Featuring a wealth of color images, this fascinating book demonstrates how the rootedness of place, culture, and tradition is closely tied to the circulation of people, objects, and ideas. These "fragments in time" offer irrefutable evidence of the key role that Africa played in medieval history and promote a new understanding of the past and the present. Published in association with the Mary and Leigh Block Museum of Art, Northwestern University Exhibition Schedule
Block Museum of Art, Northwestern University
January 26-July 21, 2019 Aga Khan Museum, Toronto
September 21, 2019-February 23, 2020 Smithsonian National Museum of African Art, Washington, DC
April 8-November 29, 2020

Kathleen Bickford Berzock is associate director of curatorial affairs at the Block Museum of Art at Northwestern University. She is the author of For Hearth and Altar: African Ceramics from the Keith Achepohl Collection and the coeditor of Representing Africa in American Art Museums: A Century of Collecting and Display.