How to Innovate: An Ancient Guide to Creative Thinking 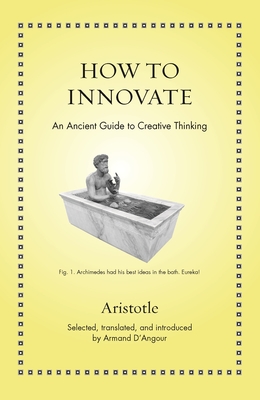 How to Innovate: An Ancient Guide to Creative Thinking

When it comes to innovation and creative thinking, we are still catching up with the ancient Greeks. Between 800 and 300 BCE, they changed the world with astonishing inventions--democracy, the alphabet, philosophy, logic, rhetoric, mathematical proof, rational medicine, coins, architectural canons, drama, lifelike sculpture, and competitive athletics. None of this happened by accident. Recognizing the power of the new and trying to understand and promote the conditions that make it possible, the Greeks were the first to write about innovation and even the first to record a word for forging something new. In short, the Greeks "invented" innovation itself--and they still have a great deal to teach us about it. How to Innovate is an engaging and entertaining introduction to key ideas about--and examples of--innovation and creative thinking from ancient Greece. Armand D'Angour provides lively new translations of selections from Aristotle, Diodorus, and Athenaeus, with the original Greek text on facing pages. These writings illuminate and illustrate timeless principles of creating something new--borrowing or adapting existing ideas or things, cross-fertilizing disparate elements, or criticizing and disrupting current conditions. From the true story of Archimedes's famous "Eureka " moment, to Aristotle's thoughts on physical change and political innovation, to accounts of how disruption and competition drove invention in Greek warfare and the visual arts, How to Innovate is filled with valuable insights about how change happens--and how to bring it about.

Armand D'Angour is professor of classics and a fellow of Jesus College at the University of Oxford. He is the author of Socrates in Love: The Making of a Philosopher and The Greeks and the New: Novelty in Ancient Greek Imagination and Experience. He has lectured widely on innovation at business schools and he managed a family manufacturing business before becoming a classics professor. He lives in London. Twitter @ArmandDAngour