Decline and Fall of All Evil: The Most Important Discovery of Our Times 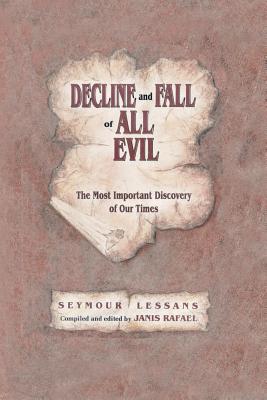 Decline and Fall of All Evil: The Most Important Discovery of Our Times

By  Seymour Lessans , Editor  Janis Rafael
$ 24.99
Out of Stock In Store (Available to Order)

Many theories as to how world peace could be achieved have been proposed, yet war has once again taken its deadly toll in the 21st century. The dream of peace has remained an unattainable goal - until now. The following pages reveal a scientific discovery regarding a psychological law of man's nature never before understood. This finding was hidden so successfully behind layers and layers of dogma and misunderstanding that no one knew a deeper truth existed. Once this natural law becomes a permanent condition of the environment, it will allow mankind, for the very first time, to veer in a different direction - preventing the never-ending cycle of hurt and retaliation in human relations. Although this discovery was borne out of philosophical thought, it is factual, not theoretical, in nature. Two other natural laws are also revealed in later chapters. It is demonstrated that because we never understood a projecting function of the brain, words developed that allowed us to see, as on a screen, that half the human race is an inferior physiognomic production - homely, bad-looking, etc. But these words do not symbolize reality because people are not ugly or beautiful, just different, and when the truth is learned - the use of these words, and this kind of unjust, hurtful discrimination, must come to an end. The other law asks this question: With the Earth billions of years old, and with millions and millions of babies coming into the world since time immemorial, doesn't it seem a strange coincidence and unbelievable phenomenon that YOU, OF ALL PEOPLE, were born and are alive at this infinitesimal fraction of time? The undeniable answer will make you very happy by removing any fears you might have regarding your own death.