The Hanford Plaintiffs: Voices from the Fight for Atomic Justice 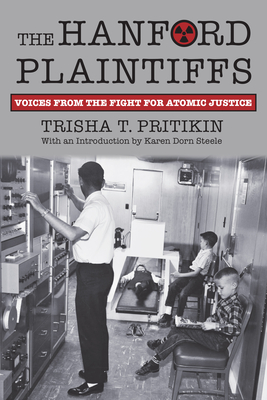 The Hanford Plaintiffs: Voices from the Fight for Atomic Justice

By  Trisha T. Pritikin , Foreword by  Richard C. Eymann
Paperback
$ 28.95
Out of Stock In Store (Click to Order)

For more than four decades beginning in 1944, the Hanford nuclear weapons facility in southeastern Washington State secretly blanketed much of the Pacific Northwest with low-dose ionizing radiation, the byproduct of plutonium production. For those who lived in the vicinity, many of them families of Hanford workers, the consequences soon became apparent as rates of illness and death steadily climbed--despite repeated assurances from the Atomic Energy Commission that the facility posed no threat. Trisha T. Pritikin, who has battled a lifetime of debilitating illness to become a lawyer and advocate for her fellow "downwinders," tells the devastating story of those who were harmed in Hanford's wake and, seeking answers and justice, were subjected to yet more suffering.

At the center of The Hanford Plaintiffs are the oral histories of twenty-four people who joined In re Hanford Nuclear Reservation Litigation, the class-action suit that sought recognition of, and recompense for, the grievous injury knowingly caused by Hanford. Radioactive contamination of American communities was not uncommon during the wartime Manhattan Project, nor during the Cold War nuclear buildup that followed. Pritikin interweaves the stories of people poisoned by Hanford with a parallel account of civilians downwind of the Nevada atomic test site, who suffer from identical radiogenic diseases. Against the heartrending details of personal illness and loss and, ultimately, persistence in the face of a legal system that protects the government on all fronts and at all costs, The Hanford Plaintiffs draws a damning picture of the failure of the US Congress and the Judiciary to defend the American public and to adequately redress a catastrophic wrong. Documenting the legal, medical, and human cost of one community's struggle for justice, this book conveys in clear and urgent terms the damage done to ordinary Americans in the name of business, progress, and patriotism.