Kaleidoscope of Dinosaurs and Prehistoric Life: Their colors and patterns explained 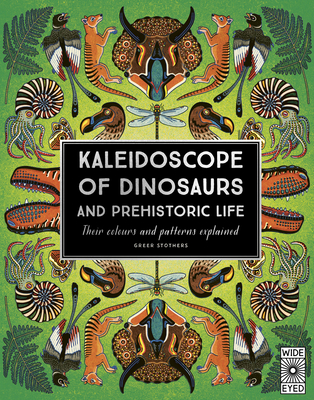 Kaleidoscope of Dinosaurs and Prehistoric Life: Their colors and patterns explained

What colors were the dinosaurs? Find out in this kaleidoscopic look at the technicolor world of dinosaurs and other prehistoric beasts as they may have looked.

A richly detailed and vibrantly illustrated natural history book, this fascinating read is bursting with color and will show you dinosaurs like never before. Discover cutting-edge theories on feathered dinosaurs, the colourful secrets of the fossil record, and what million-year-old remains tell us about how extinct animals lived and looked. Paleo-artist and author Greer Stothers reimagines the dinosaurs and their prehistoric peers, using fossils and the examples of living species to bring this often misrepresented world to life.

As well as the dinos, there’s also a section that takes a look at other extinct animals, shows how animals from the Ice Age may have looked, and explores how clues about long-dead creatures can be discovered from art by the prehistoric peoples who encountered them.

This is a beautifully illustrated first look at the kaleidoscopic world of dinosaurs and other creatures for young children, and makes a gorgeous gift for young paleontologists and art-lovers alike.

Greer Stothers is an award-winning Canadian illustrator with a background in evolutionary biology. They are deeply interested in the interplay between science and art, and their risograph prints have been displayed in museums and galleries in Canada, the USA, Germany, and Indonesia.