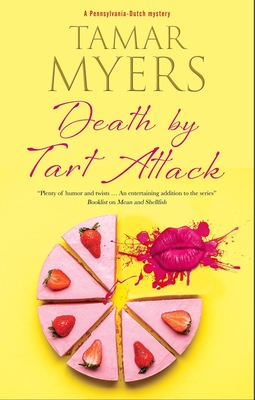 Magdalena Yoder is accused of murdering her ex-husband in this delightfully quirky cozy mystery set among Pennsylvania's Amish-Mennonite community.

"You're going to be sorry, Aaron Paul Miller. Before I'm through with you, you're going to wish that you were dead."
Shockwaves are running through the small town of Hernia with the news that an enormous, biblical-themed amusement park is to be built on its doorstep, destroying the community's peaceful way of life for ever. And the man spearheading this so-called Armageddonland? None other than Magdalena's ex-husband, the duplicitous Aaron Miller.
At a public demonstration to showcase his plans for the new park, Aaron bites into a delicious homemade tart - with fatal consequences. It's clear the tart was poisoned . . . but who baked it?
As the leader of the local resistance against the project and her acrimonious history with her ex well known, Magdalena immediately falls under suspicion. Determined to clear her name, she resolves to find the real killer, and soon finds herself wrestling with a number of scandalous secrets lurking beneath Hernia's seemingly staid surface.

Tamar Myers was born in what was then the Belgian Congo in 1948, where her parents were American-Mennonite missionaries to a tribe of headhunters. She moved to the USA at the age of fifteen. On her mother's side, Tamar is descended from one of the first Amish families to settle in America in 1738. She is the author of more than forty mysteries and many short stories.