The Scout Mindset: Why Some People See Things Clearly and Others Don't 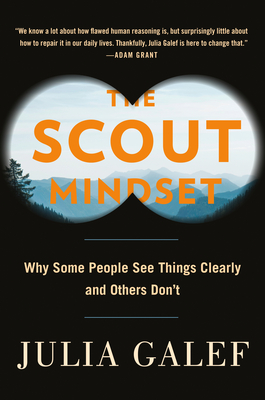 The Scout Mindset: Why Some People See Things Clearly and Others Don't

"...an engaging and enlightening account from which we all can benefit."—The Wall Street Journal

A better way to combat knee-jerk biases and make smarter decisions, from Julia Galef, the acclaimed expert on rational decision-making.

When it comes to what we believe, humans see what they want to see. In other words, we have what Julia Galef calls a "soldier" mindset. From tribalism and wishful thinking, to rationalizing in our personal lives and everything in between, we are driven to defend the ideas we most want to believe—and shoot down those we don't.

But if we want to get things right more often, argues Galef, we should train ourselves to have a "scout" mindset. Unlike the soldier, a scout's goal isn't to defend one side over the other. It's to go out, survey the territory, and come back with as accurate a map as possible. Regardless of what they hope to be the case, above all, the scout wants to know what's actually true.

In The Scout Mindset, Galef shows that what makes scouts better at getting things right isn't that they're smarter or more knowledgeable than everyone else. It's a handful of emotional skills, habits, and ways of looking at the world—which anyone can learn. With fascinating examples ranging from how to survive being stranded in the middle of the ocean, to how Jeff Bezos avoids overconfidence, to how superforecasters outperform CIA operatives, to Reddit threads and modern partisan politics, Galef explores why our brains deceive us and what we can do to change the way we think.

Julia Galef is the host of the popular Rationally Speaking podcast, where she has interviewed thinkers such as Tyler Cowen, Sean Carroll, Phil Tetlock, and Neil deGrasse Tyson. She is an advisor to OpenAI, works with the Open Philanthropy Project, and cofounded the Center for Applied Rationality. Her 2016 TED Talk "Why You Think You're Right--Even If You're Wrong" has been viewed over 4 million times.