Grand Delusion: The Rise and Fall of American Ambition in the Middle East 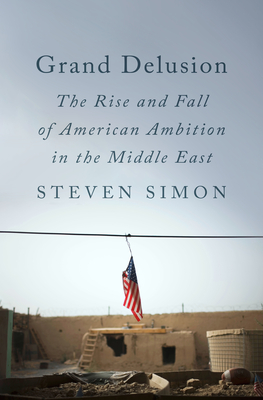 Grand Delusion: The Rise and Fall of American Ambition in the Middle East

The culmination of almost 40 years of expertise and insider policy access, Grand Delusion is Steven Simon’s tour de force, offering a comprehensive yet analytical tour of U.S. involvement in the Middle East. Simon begins with the Reagan administration, when the Middle East shifted from a group of faraway and frequently squabbling nations to an urgent opportunity for America to (in Reagan’s words) “serve the cause of world peace and the future of mankind.” Assuring citizens that “we owe it to ourselves and to our children” to be a force for peace in the region, Reagan fired the starting gun on decades of profound American involvement.

As the U.S. economy became increasingly reliant on oil and as policy and diplomatic momentum gathered, the Middle East became more and more central to foreign policy, and more and more likely to be the subject of grand rhetoric, until the Obama administration ended an era by turning away from the region. Grand Delusion explores the motivations, approach, and legacy of each administration up to today, showing us a complex spiderweb of intertwined events—from Lebanese civil conflict to shifting Iranian domestic politics, to Saudi Arabia’s quest for security—through the lens of a Washington policy process frequently ruled by cognitive bias, wishful thinking, and outright malfeasance.

Simon’s sharp sense of humor and incisive analytical powers bring a complex history to life. Despite an impressive DC resume—he rose to become the National Security Council senior director for Middle Eastern and North African affairs—Simon never fails to tell the truth as he sees it. He challenges the nature of American commitment to Israel; disputes the popular narrative of Desert Storm as a “good war”; and calls out the enormous consequences of our mistakes, particularly for victims of American military action.

As Grand Delusion shows, this story is only occasionally impressive, and frequently disgraceful. But it’s a story with deep and enduring resonance for the future of both the U.S. and the Middle East.

Steven Simon served on the National Security Council staff as senior director for Middle Eastern and North African affairs 2011-2012. He also worked on the NSC staff 1994-1999 on counterterrorism and Middle East security policy. These assignments followed a fifteen-year career at the U.S. Department of State. Between government assignments, he was Hasib Sabbagh senior fellow for Middle Eastern studies at the Council on Foreign Relations, analyst at the RAND Corporation, and deputy director of the International Institute for Strategic Studies; he is currently a professor at Colby College. He is the co-author, among other books, of The Age of Sacred Terror, winner of the Arthur C. Ross Award for best book in international relations.