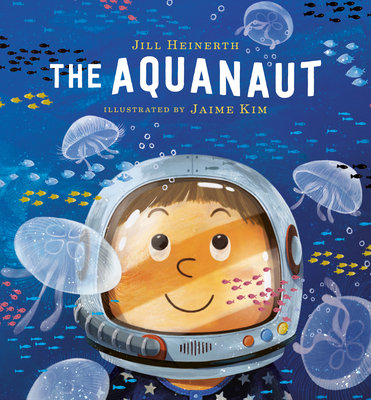 Written by an award-winning aquanaut and with art by a #1 New York Times bestselling illustrator, this inspiring picture book encourages readers to explore their world, build their self-esteem and imagine what they can do and become when they grow up.

When I was young, the world seemed too dangerous. Everything was too hard. I was too young. Places were too far away. But that was okay because I had a big imagination . . .

Through beautiful, spare text, Jill Heinerth tells her story about a girl who feels too young, too little and too far away from her dreams. But you don't need to wait to grow up. It doesn't take much to imagine all the things you can do and be. What if your bedroom were a space station? What would it be like to have flippers or tusks? In your own home you can explore new worlds and meet new friends.

Jaime Kim's luminous art transports readers back and forth through time to see how Jill's imagination as a young girl laid the pathway to her accomplishments and experiences as an underwater explorer.

JILL HEINERTH is a cave diver, underwater explorer, writer, photographer and filmmaker. More people have walked on the moon than have been to some of the places Jill has explored on earth. She has made TV series for the CBC, the National Geographic channel, and the BBC, consulted on movies, including for director James Cameron, and produced documentaries, including We Are Water and Ben's Vortex. Jill's accolades include induction into The Explorers Club and the inaugural class of the Women Divers Hall of Fame. She is also the inaugural Explorer-in-Residence for The Royal Canadian Geographic Society, and the recipient of Canada's prestigious Polar Medal and the diving world's highest award from the Academy of Underwater Arts and Sciences.

JAIME KIM was born and raised in South Korea and now lives in North Carolina. Although she was a timid child who was afraid of just about everything, she discovered a sense of serenity in drawing. As a grown-up, Jaime finally stopped being afraid of everything, but kept on drawing and painting. She works with gouache, watercolors and acrylics to create nostalgic and dreamlike illustrations, inspired by childhood memories of her family, as well as movies, art, and the outside world. Her favorite things are the sun, the moon, the sky and stars -- which is why they always creep into her artwork. Her debut illustrated picture book, Take Heart, My Child, was a #1 New York Times bestseller.