Undoing Drugs: The Untold Story of Harm Reduction and the Future of Addiction 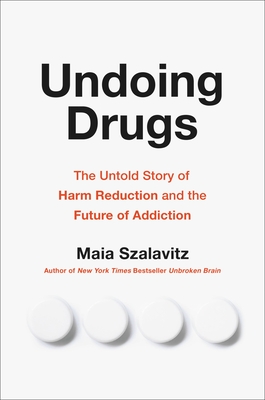 Undoing Drugs: The Untold Story of Harm Reduction and the Future of Addiction

By  Maia Szalavitz
Hardcover
$ 30.00
On Our Shelves Now

“Of the countless writers out there whose focus is addiction, no one can begin to touch the brilliance of Maia Szalavitz.”
—Kristen Johnston, actress, author of the New York Times bestselling memoir Guts, addiction advocate, founder of SLAM NYC
Drug overdoses now kill more Americans annually than guns, cars, or breast cancer. But the United States has tried to solve this national crisis with policies that only made matters worse. In the name of “sending the right message,” we have maximized the spread of infectious disease, torn families apart, incarcerated millions of mostly Black and Brown people—and utterly failed to either prevent addiction or make effective treatment for it widely available.

There is another way—one that is proven to work. However it runs counter to much of the received wisdom about substances and related problems. It is called harm reduction. Created by a group of people who use drugs and by radical public health experts, harm reduction offers a new way of thinking—one that provides startling insights into behavioral and cultural issues that go far beyond drugs.

In a spellbinding narrative rooted in an urgent call to action, Undoing Drugs tells the untold tale of a quirky political movement that has unexpectedly shaken the foundations of world drug policy. It illustrates how hard it can be to take on widely accepted conventional thinking—and what is necessary to overcome this resistance. Ultimately, Undoing Drugs offers a path forward—led by characters who spent many years being dismissed as worthless, only to develop a breakthrough philosophy that can dramatically improve world health.

Maia Szalavitz is the author or coauthor of eight books, including the bestseller Unbroken Brain and the classic on child trauma, The Boy Who Was Raised as a Dog, which she wrote with Bruce D. Perry. She has written for the New York Times, the Washington Post, Scientific American, the Atlantic, TIME, The Guardian, and VICE.