Eat First--You Don't Know What They'll Give You: The Adventures of an Immigrant Family and Their Feminist Daughter 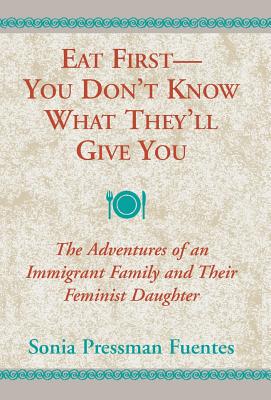 Eat First--You Don't Know What They'll Give You: The Adventures of an Immigrant Family and Their Feminist Daughter

By  Sonia Pressman Fuentes
Hardcover
$ 32.99
Out of Stock In Store (Available to Order)

EAT FIRST--YOU DONT KNOW WHAT THEYLL GIVE YOU, written with warmth and humor, is the story of Sonia Pressman Fuentes, one of the pioneers of the Second Wave of the womens movement and her family. Fuentes, who was born in Berlin, Germany, came to the US with her immediate family to escape the Holocaust. Her memoirs reveal how the five-year-old immigrant in 1934 became the first woman attorney in the Office of the General Counsel at the Equal Employment Opportunity Commission (EEOC) in 1965, one of the founders of the National Organization for Women (NOW) in 1966, the highest-paid woman at the headquarters of two multinational corporations: GTE and TRW, and an international speaker on womens rights for the US Information Agency.

The story begins with the wedding of Fuentes parents, Hinda and Zysia Pressman, in Piltz, a town in Poland. It goes on to the adventures of the Pressmans and Fuentes in Berlin, Antwerp, the Bronx, the Catskills, Miami Beach, Los Angeles, Cleveland, Stamford (Connecticut), and Washington, DC. Along the way, Fuentes had encounters with Pat Ward (a notorious call girl in the 50s), Betty Friedan, Harry Golden, Dr. Cecil Jacobson (a prominent geneticist convicted on fifty-two counts of perjury and fraud), and many others. At forty-two, she married a handsome Puerto Rican and 1 years later, her Puerto Rican Jewish daughter was born. She tells about it all in Eat First. "I walk in the footprints of Sonia Pressman Fuentes." --Patricia Ireland, president, NOW "Evoking a tear here and a chuckle there, with her heart- warming wit and wisdom, Sonia Pressman Fuentes recounts the story of a Jewish family, her family, from her grandparents origin in a shtettl in Poland right through her own career as a founder of NOW and beyond." --Gus Tyler, columnist, contributing editor, The Forward "Sonia Pressman Fuentes played a major role in the birth of the new womens movement and her tales of its early days will delight historians and those who are curious about the beginnings of this great social movement. Fuentes is a born story-teller, with a particular knack for seeing the humorous aspects of her life." --Dr. Bernice Sandler, Senior Scholar in Residence, National Association for Women in Education "I referred to you just the other day (as I frequently do) as one of the great, unsung heroes of the womens and civil rights movements. You single-handedly persuaded Roosevelt, Edelsberg, me and others to take sex discrimination seriously which, without you, we would not have done." --Charles T. Duncan, former General Counsel, EEOC; former Corporation Counsel of the District of Columbia; former Dean, Howard University School of Law For more reviews and interviews with the author of Eat First--You Dont Know What Theyll Give You, please visit http: //www.erraticimpact.com/fuentes

Sonia Pressman Fuentes is a lawyer, writer, and speaker. She was the first woman attorney in the General Counsel's Office at the Equal Employment Opportunity Commission (EEOC) and a founder of the National Organization for Women (NOW). In 1996, she received the Veteran Feminists of America Medal of Honor.