Prozac Backlash: Overcoming the Dangers of Prozac, Zoloft, Paxil, and Other Antidepressants with Safe, Effective Alternatives 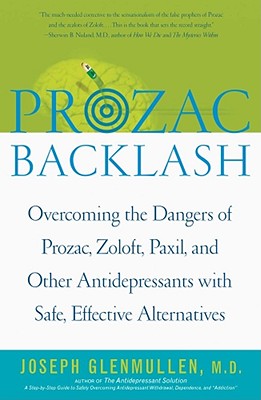 Prozac Backlash: Overcoming the Dangers of Prozac, Zoloft, Paxil, and Other Antidepressants with Safe, Effective Alternatives

Roughly 28 million Americans -- one in every ten -- have taken Prozac, Zoloft, or Paxil or a similar antidepressant, yet very few patients are aware of the dangers of these drugs, nor are they aware that better, safer alternatives exist. Now Harvard Medical School's Dr. Joseph Glenmullen documents the ominous long-term side effects associated with these and other serotonin-boosting medications. These side effects include neurological disorders, such as disfiguring facial and whole-body tics that can indicate brain damage; sexual dysfunction in up to 60 percent of users; debilitating withdrawal symptoms, including visual hallucinations, electric shock-like sensations in the brain, dizziness, nausea, and anxiety; and a decrease of antidepressant effectiveness in about 35 percent of long-term users. In addition, Dr. Glenmullen's research and riveting case studies shed shocking new light on the direct link between these drugs and suicide and violence.
Written by a doctor with impeccable credentials, Prozac Backlash is filled with compelling, sometimes heartrending stories and is thoroughly documented with extensive scientific sources. It is both provocative and hopeful, a sound, reliable guide to the safe treatment of depression and other psychiatric problems.

Joseph Glenmullen, M.D., is a clinical instructor in psychiatry at Harvard Medical School, is on the staff of the Harvard University Health Services, and is in private practice in Harvard Square. A nationally recognized authority on antidepressant side effects, Dr. Glenmullen testified at the FDA hearing that resulted in the FDA's spring 2004 warning about the dangers of antidepressant use, especially suicidal tendencies. Dr. Glenmullen won the 2001 Annual Achievement Award from the American Academy for the Advancement of Medicine for his efforts in warning physicians about the potential dangers of antidepressants in his widely acclaimed book Prozac Backlash. Dr. Glenmullen lives with his wife and three children in Cambridge, Massachusetts, and can be found on the web at www.drglenmullen.com.