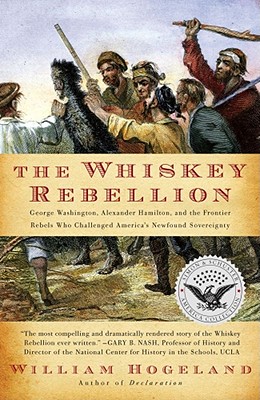 By  William Hogeland
Paperback
$ 17.99
Out of Stock In Store (Click to Order)

A gripping and sensational tale of violence, alcohol, and taxes, The Whiskey Rebellion uncovers the radical eighteenth-century people’s movement, long ignored by historians, that contributed decisively to the establishment of federal authority.

In 1791, on the frontier of western Pennsylvania, local gangs of insurgents with blackened faces began to attack federal officials, beating and torturing the tax collectors who attempted to collect the first federal tax ever laid on an American product—whiskey. To the hard-bitten people of the depressed and violent West, the whiskey tax paralyzed their rural economies, putting money in the coffers of already wealthy creditors and industrialists. To Alexander Hamilton, the tax was the key to industrial growth. To President Washington, it was the catalyst for the first-ever deployment of a federal army, a military action that would suppress an insurgency against the American government.

With an unsparing look at both Hamilton and Washington, journalist and historian William Hogeland offers a provocative, in-depth analysis of this forgotten revolution and suppression. Focusing on the battle between government and the early-American evangelical movement that advocated western secession, The Whiskey Rebellion is an intense and insightful examination of the roots of federal power and the most fundamental conflicts that ignited—and continue to smolder—in the United States.

William Hogeland has published in numerous print and online periodicals, including The New York Times, The Atlantic Monthly, and Slate. He lives and writes in Brooklyn, New York.