Eyeing the Flash: The Education of a Carnival Con Artist 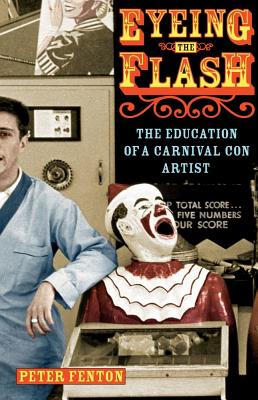 Eyeing the Flash: The Education of a Carnival Con Artist

The year is 1963, the setting is small-town Michigan. At age fifteen, Peter Fenton is a gawky math whiz schoolboy with a dissatisfied mother, a father who drinks himself to foolishness, and no chance whatsoever with girls. That's when he meets Jackie Barron.

Jackie is the unlikely progeny of Double-O and Vera, professional grifters running a third-rate traveling carnival, and he's been part of the family business since he started earning his keep as the World's Youngest Elephant Trainer. Jackie is a smooth-talking teenage carnie with his own Thunderbird, and with wisdom beyond his years.

Jackie shares Pete's way with numbers, and he has a proposition. They'll start a rigged casino in Jackie's basement and take their classmates for thousands of dollars. Pete hesitates, but not for very long. Two years later, he's working joints for the Barrons' Party Time Shows, wearing sharkskin suits and alligator shoes, and relieving the public of its hard-earned cash. He learns to hold his own with veteran con men who have nicknames like the Ghost, Horserace Harry, and Talking Tony, and colorful personalities to match. This is the world of the Alibi and the Hanky Pank, of Flatties and the mark. Amazingly, Pete Fenton has never been more at home.

But in this strange new world with its topsy-turvy code of ethics, where leaving a mark without a dollar for gas is outlawed while cheating a best friend is par for the course, the tension between teacher and student grows until Pete finds himself attempting the ultimate challenge: to out-con his mentor.

"Eyeing the Flash" is a fascinating insider's view of the carnival underworld -- the cons, the double-dealing, the quick banter, and, of course, the easy money. The story of a shy middle-class kid turned first-class huckster, Peter Fenton's coming-of-age memoir is highly unorthodox, and utterly compelling.