Storm Warning: The Story of a Killer Tornado 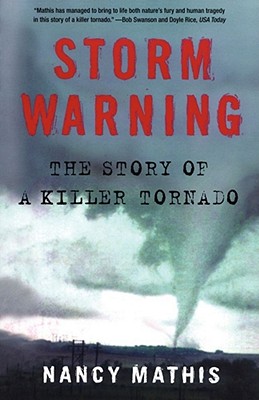 Storm Warning: The Story of a Killer Tornado

A nail-biting, captivating look at tornados, from personal stories of those impacted by the natural disasters to the history of the struggle to understand this bewildering force of Mother Nature.

May 3, 1999, is a day that Oklahomans will never forget. By the time the sun set over a ravaged plain, some 71 tornadoes had claimed around 11,000 homes and businesses and caused $1 billion in damage. One of them was a mile-wide monster of incredible power, the fiercest F5 twister to hit a metropolitan area, and whose 300 mph winds were the fastest ever recorded.

Veteran journalist Nancy Mathis draws on many interviews to weave the story of those few terrifying hours that irrevocably changed the lives of many Oklahomans. Storm Warning features Kara Wiese, who fought to save her son from the fatal winds; and Charlie Cusack, who followed the tornado's progress on television until it came knocking on his front door. Amazingly, only thirty-eight people perished at the hands of the Oklahoma F5. Many lives were saved by the efforts of professionals such as Ted Fujita, the creator of the Fujita Scale and dubbed "Mr. Tornado" for his relentless pursuit to unravel a twister's mysteries; the oft-criticized but dogged government meteorologists; and Gary England, a resourceful TV weatherman whose tireless efforts prepared hundreds of people in the tornado's path.

Nancy Mathis, a native of Oklahoma, was a journalist and former White House correspondent before going into media relations. She lives in Silver Spring, Maryland.