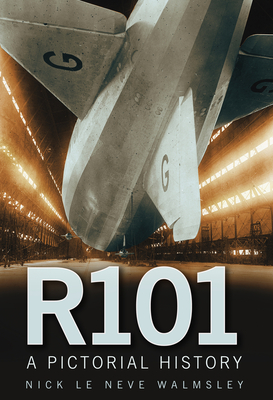 At the time of her construction in the late 1920s, His Majesty's Airship R101 was the largest flying object ever made—as big and luxurious as an ocean liner, a Titanic of the skies designed to link the far-flung corners of the British Empire within days. As Britain recovered from the horrors of the trenches, R101's graceful lines, vast size, and luxurious accommodation came to represent the supreme self-confidence and hopes of a nation. But that unclouded vision was fatally colored by personal ambition, heroism, weakness, and political intrigue that touched many lives and reached a terrible climax on a storm-lashed hillside in France in the early hours of October 5, 1930. This book is the first to tell her story through contemporary photographs and actual material used during her construction. By returning to original sources, Nick Walmsley challenges the long-held view that R101 was a bad aircraft built by careless people. Atmospherically capturing the heady days of the 1920s, R101: A Pictorial History has wide appeal to aviation enthusiasts, social historians, and anyone fascinated by a tale of an heroic dream with a horrific end.

Nick le Neve Walmsley edited the internationally respected Dirigible, the house magazine of the Airship Heritage Trust, for many years. He is an acknowledged expert in lighter-than-air travel, having acted as a technical adviser on the subject for the BBC, Anglia TV, and Channel 4.