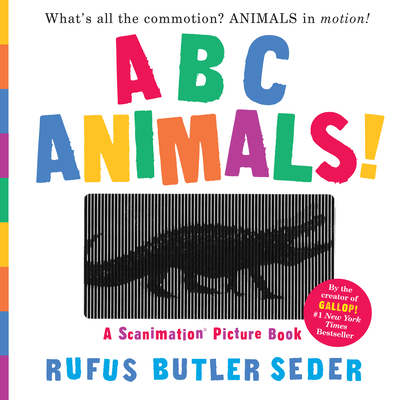 Scanimation is a state-of-the-art animation process that creates the illusion of movement in each picture. In terms kids can relate to, it's like a video without a screen.

ABC Animals presents the alphabet as it’s never been seen before. In a romping, stomping journey from A to Z, watch the Alligator snap, the Bats swooping, the Camel trot. There’s L for the Lion proudly prowling along, and M for the Mouse scurrying inside his wheel. And it all culminates in the largest Scanimation image yet: Z, for Zoo, where all the animals gather to play. Each page is a marvel that brings animals, along with one shining star, to life with art that literally moves. It's impossible not to flip the page, and flip it again, and again, and again.

Rufus Butler Seder is an optical genius whose first significant invention was Lifetiles, glass-walled murals that appear to come to life when the viewer walks by. He’s installed them at the Smithsonian, SeaWorld, Union Station, and other museums, aquariums, train stations, and ocean liners around the world. Next came Scanimation, and his company EyeThink, Inc., a business that produces a line of toys and gifts using technologies he’s invented. Mr. Seder lives in Boston, Massachusetts.