So You Wanna Be A Pop Star?: A Choices Novel 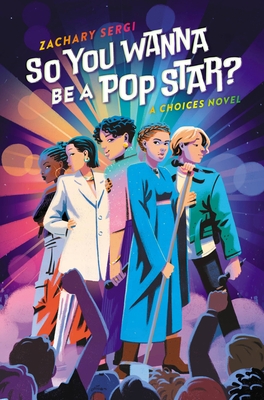 So You Wanna Be A Pop Star?: A Choices Novel

An energetic, interactive YA novel about five solo pop artists navigating drama, finding their sound, and discovering what it truly takes to chase their dreams of music stardom after being forced into a pop group together.

Everly Brooks knows she has what it takes to be the next big singer-songwriter. At least, that's if she could get her onstage presence to stop feeling so wooden and blossom like her rich, moving lyrics. The reality signing competition, SO YOU WANNA BE A POP STAR? is her chance at proving to the world—and herself—that her talent and artistry can mean something more than just live streams and online videos.

Vinny Vecchi thought he was heading toward a life full of makeup, wigs, and werking it on the drag stages of NYC. But a powerful diva voice is a precious thing to waste and, in need of money to make his drag dreams come true, SO YOU WANNA BE A POP STAR? is the next best thing. However, surrounded by competitors with clear brands and sharpened musical identities, he wonders if he can break through while still discovering himself.

When a group performance on the show goes viral overnight, Everly and Vinny find their careers unexpectedly tied together. Along with their competitors—influencer Dea Seo, pop-punk CeCe Winnifred, and heartthrob Stern Green—these five artists are forced to become the newest pop super group: Jeweltones.

You, the reader, get to make choices that will make or break Everly, Vinny, and the group’s meteoric rise in this interactive novel. Will you mend the cracks to help Jeweltones shine bright, or will they burn out under pressure? The choices are yours to make!

Zachary Sergi is a queer author of Interactive Fiction, including his print debut Major Detours as well as the digital Heroes Rise, Versus, and Fortune The Fatedseries. Zachary was raised in Manhattan, studied Creative Writing at Regis High School and the University of Pennsylvania, and now lives in Los Angeles with his husband, where he also writes for television. Learn more at zacharysergi.com or by following @zacharysergi on Twitter/TikTok or @zacharysergiwriter on Instagram.