A Visual Learner's Guide to Being a Grown-Up 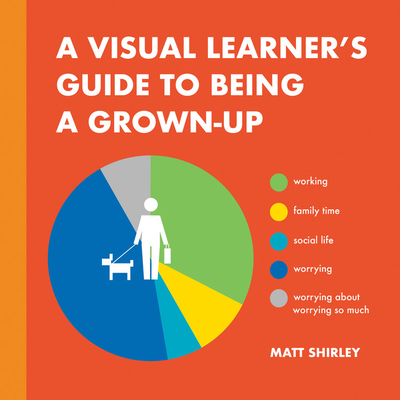 A Visual Learner's Guide to Being a Grown-Up

Based on Matt Shirley's popular Instagram account @mattsurelee, this smart and hilarious guide is a collection of tables, lists, and charts for all the visual learners out there striving to be a successful grown-up.

We all know the particular pain that comes with having to be an actual adult, whether it's resetting your internet password on ten different sites, yearning for an excuse to get out of the plans your wife made for you months ago, or the anxiety that comes from forcing yourself to work out again.

When Matt Shirley became fed up with being a grown-up, he started drawing charts as a more fun and efficient way to cope with his frustrations, and stuck them up on Instagram where they became an instant hit. Packed with over one hundred charts, graphs, diagrams, and infographics—with 50 percent brand-new material—this hilarious collection vows to explain everything you need to know about how to be a grown-up, covering work, family, and friends, to dating, breakups, and more.

From explaining the cycle of adulthood to decoding the pros and cons of first dates to understanding the corporate lingo translator, Shirley's charts cut to the core of how to be an adult in the funniest possible way.

Matt Shirley started making charts in 2008 and eventually figured out he could get paid for it. Today, Matt is a full-time chart-maker and freelancer, creating visual content for a variety of clients across the world. Matt's charts have made the front page of Reddit numerous times and have been featured on The Today Show. Previously he was an editor for Playboy and Civilized.