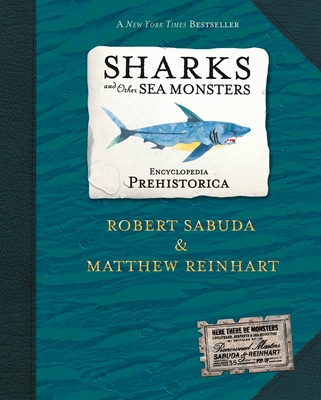 Just when you thought it was safe to go back in the water! Celebrate the New York Times best-selling 3-D look at prehistoric creatures of the deep.

While dinosaurs patrolled the lands, massive prehistoric sharks, giant scorpions, and colossal squid cruised the ancient oceans — most with just one thing in mind: eat or be eaten. Pop-up masters Robert Sabuda and Matthew Reinhart explore the prehistoric underwater world where monsters like megalodon ruled the waves. Full of captivating facts and more than thirty-five breathtaking pop-ups, this incredible volume is sure to astonish and amaze everyone from budding marine biologists to confirmed landlubbers.

Matthew Reinhart is the cocreator of the Encyclopedia Prehistorica and Encyclopedia Mythologica series. He has also created many other award-winning pop-up books, including Mommy? by Maurice Sendak and Arthur Yorinks and Star Wars: A Pop-up Guide to the Universe. He lives in New York City.

Robert Sabuda is the cocreator of the Encyclopedia Prehistorica and Encyclopedia Mythologica books. He is also the creator of many other best-selling pop-up books, including America the Beautiful, Alice’s Adventures in Wonderland, and The Wonderful Wizard of Oz. He lives in New York City.