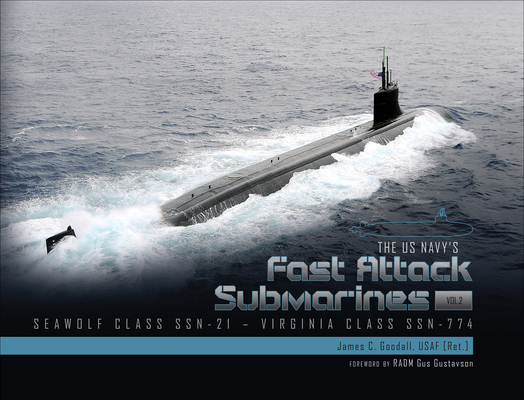 By  James C. Goodall , Foreword by  Radm Gus Gustavson
Hardcover
$ 34.99
Out of Stock In Store (Click to Order)

Successors to the US Navy's Los Angeles-class fast-attack submarines (presented in volume 1), the Seawolf- and Virginia-class SSNs are presented here from their initial design and construction, through testing and trials, to current operations. From its debut in 1997, the nuclear-powered Seawolf (SSN-21) represented the lead ship of the deadliest submarine ever to be constructed for the USN during the Cold War. With the end of the Cold War, the Seawolf-class SSNs were limited to the three that were under construction at the time, and the program was terminated. With only three in the class, the supersecret USS Jimmy Carter (SSN-23) is virtually off limits to any and all photography. The author's unprecedented access onboard a Seawolf-class SSN--the USS Connecticut (SSN-22)--is a first for the Navy and provides exclusive coverage found only in this book. In place of the Seawolf class, the Virginia-class attack submarine is an advanced stealth, multimission nuclear-powered submarine for deep-ocean antisubmarine warfare and littoral (shallow water) operations.

Over the last thirty-five years, Jim Goodall has authored more than two dozen books and articles on military aircraft, naval ships, and submarines, with a focus on low observables, or, as known today, stealth.