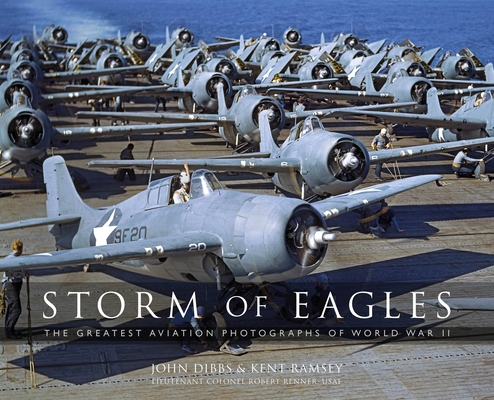 Published in association with the National Museum of World War II Aviation, Storm of Eagles is a lavishly illustrated coffee-table book that brings together breathtaking classic and never-before-seen wartime images of pilots and their aircraft.

Soaring high above the fields and cities of Europe and Asia, as well as the vast expanse of the Pacific, Allied and Axis pilots of World War II engaged in a deadly battle for control of the skies—whoever won the skies would win the war. Compiled by one of the world's premier aviation photographers and historians, and including rare, masterfully restored images of aircraft like the Supermarine Spitfire, P-51 Mustang, and the Messerschmitt 109, this remarkable volume is a must-have for anyone interested in World War II aviation.

John M. Dibbs is an award-winning air-to-air photographer who has flown in more than 120 different aircraft types, undertaken 850-plus air-to-air sorties, and authored eleven books, including his widely acclaimed Flying Legends series. His website is planepicture.com. He lives in Redmond, Washington.

Robert "Cricket" Renner is a 1988 Air Force Academy graduate who retired in 2010 following twenty-two years of active duty service, almost all of which involved flying combat aircraft. With over 3,200 hours in the F-15 Eagle, Lieutenant Colonel Renner flew thirty-seven combat sorties over northern and southern Iraq, was awarded the Distinguished Flying Cross, and has been rated as an instructor pilot since 1994. He resides with his family near Anchorage in Eagle River, Alaska.

Kent Austin Ramsey has had a lifelong passion for World War II aviation history, and his inspiration is driven by his uncle's P-38/F-5 flight history in both the Pacific and European theaters of conflict. His uncle, Captain John G. Austin, was a photo reconnaissance pilot, and he was KIA one month before VE day. Kent has devoted the last 17 years to collecting and restoring World War II aircraft images for future generations. Kent is a native of Iowa, but he has spent the last 35 years living in the greater Seattle area.