Air Force One: A History of the Presidents and Their Planes 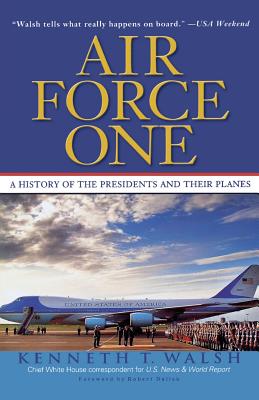 Air Force One: A History of the Presidents and Their Planes

By  Kenneth T. Walsh
Paperback
$ 17.99
Out of Stock In Store (Available to Order)

From the award-winning chief White House correspondent for U.S. News & World Report comes the definitive history of Air Force One.

From FDR's prop-driven Pan Am to the glimmering blue and white jumbo 747 on which George W. Bush travels, the president's plane has captured the public's awe and imagination, and is recognized around the world as a symbol of American power. In this unique book, Kenneth Walsh looks at the decisions that our last 12 presidents made on the plane; the personality traits and peccadilloes they revealed when their guard was down; and the way they each established a distinctive mood aboard that was a reflection of their times, as well as their individual personalities.

Based on interviews with four living presidents, scores of past and present White House officials, and staff and crew members of Air Force One, Walsh's book reveals countless fascinating stories of life aboard the "flying White House." It also features descriptions of the food, the decor, the bedrooms, the medical clinic, and much more--as well as remarkable photos of the planes (inside and out) and the presidents.

Kenneth T. Walsh has covered the White House since 1986 and has won the two most prestigious honors for reporting on the presidency. He is also the former president of the White House Correspondents' Association. The author of two books, Ronald Reagan and Feeding the Beast, he has served as adjunct professor of communication at American University in Washington, D.C., and is often a guest on MSNBC, Fox News, and other television and radio programs. He lives in Bethesda, Maryland.