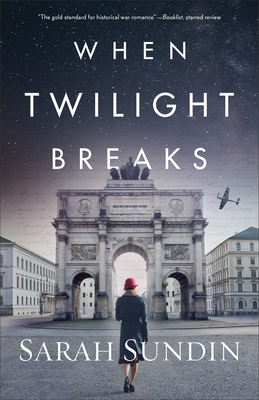 "Sundin's novels set the gold standard for historical war romance, and When Twilight Breaks is arguably her most brilliant and important work to date."--Booklist starred review

Munich, 1938. Evelyn Brand is an American foreign correspondent as determined to prove her worth in a male-dominated profession as she is to expose the growing tyranny in Nazi Germany. To do so, she must walk a thin line. If she offends the government, she could be expelled from the country--or worse. If she fails to truthfully report on major stories, she'll never be able to give a voice to the oppressed--and wake up the folks back home.

In another part of the city, American graduate student Peter Lang is working on his PhD in German. Disillusioned with the chaos in the world due to the Great Depression, he is impressed with the prosperity and order of German society. But when the brutality of the regime hits close, he discovers a far better way to use his contacts within the Nazi party--to feed information to the shrewd reporter he can't get off his mind.

This electric standalone novel from fan-favorite Sarah Sundin puts you right at the intersection of pulse-pounding suspense and heart-stopping romance.


"Sundin combines suspense and romance to great effect . . . Inspirational fans who like high-octane action will enjoy this thrilling story."--Publishers Weekly

"Sundin masterfully combines action and attraction to generate multilayered thrills while exploring such themes as individual freedom versus the common good, gender and racial discrimination, and the polarization of viewpoints, which all have deep relevance today."--Booklist starred review

Sarah Sundin is the bestselling author of several popular WWII series, including Sunrise at Normandy, Waves of Freedom, Wings of the Nightingale, and Wings of Glory. Her novels have received starred reviews from Booklist, Library Journal, and Publishers Weekly. The Sky Above Us received the Carol Award, her bestselling The Sea Before Us received the FHL Reader's Choice Award, and both Through Waters Deep and When Tides Turn were named on Booklist's "101 Best Romance Novels of the Last 10 Years." Sarah lives in Northern California. Visit www.sarahsundin.com for more information.