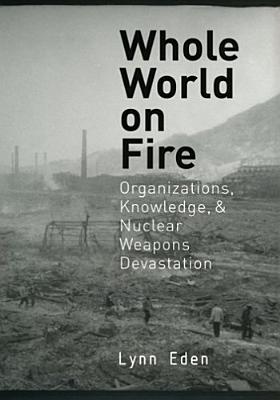 Whole World on Fire focuses on a technical riddle wrapped in an organizational mystery: How and why, for more than half a century, did the U.S. government fail to predict nuclear fire damage as it drew up plans to fight strategic nuclear war?U.S. bombing in World War II caused massive fire damage to Hiroshima and Nagasaki, but later war plans took account only of damage from blast; they completely ignored damage from atomic firestorms. Recently a small group of researchers has shown that for modern nuclear weapons the destructiveness and lethality of nuclear mass fire often--and predictably--greatly exceeds that of nuclear blast. This has major implications for defense policy: the U.S. government has underestimated the damage caused by nuclear weapons, Lynn Eden finds, and built far more warheads, and far more destructive warheads, than it needed for the Pentagon's war-planning purposes. How could this have happened? The answer lies in how organizations frame the problems they try to solve. In a narrative grounded in organization theory, science and technology studies, and primary historical sources (including declassified documents and interviews), Eden explains how the U.S. Air Force's doctrine of precision bombing led to the development of very good predictions of nuclear blast--a significant achievement--but for many years to no development of organizational knowledge about nuclear fire. Expert communities outside the military reinforced this disparity in organizational capability to predict blast damage but not fire damage. Yet some innovation occurred, and predictions of fire damage were nearly incorporated into nuclear war planning in the early 1990s. The author explains how such a dramatic change almost happened, and why it did not. Whole World on Fire shows how well-funded and highly professional organizations, by focusing on what they do well and systematically excluding what they don't do well, may build a poor representation of the world--a self-reinforcing fallacy that can have serious consequences. In a sweeping conclusion, Eden shows the implications of the analysis for understanding such things as the sinking of the Titanic, the collapse of the Tacoma Narrows Bridge, and the poor fireproofing in the World Trade Center.

Lynn Eden is Associate Director for Research/Senior Research Scholar at the Center for International Security and Cooperation, Institute for International Studies, Stanford University. She is the author of Crisis in Watertown, coauthor of Witness in Philadelphia, coeditor of Nuclear Arguments, and an editor of The Oxford Companion to American Military History.