Justine, Philosophy in the Bedroom, and Other Writings 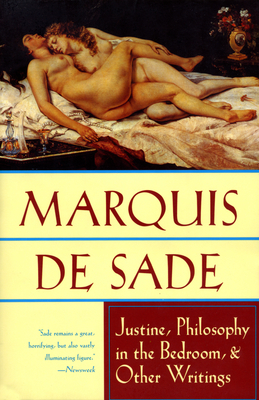 Justine, Philosophy in the Bedroom, and Other Writings

No other writer has so scandalized proper society as the Marquis de Sade, but despite the deliberate destruction of over three-quarters of his work, Sade remains a major figure in the history of ideas. His influence on some of the greatest minds of the last century--from Baudelaire and Swinburne to Nietzsche, Dostoyevsky and Kafka--is indisputable. This volume contains Philosophy in the Bedroom, a major novel that presents the clearest summation of his political philosophy; Eug nie de Franval, a novella widely considered to be a masterpiece of eighteenth-century French literature; and the only authentic and complete American edition of his most famous work, Justine. This literary portrait of Sade is completed by one of his earliest philosophical efforts, Dialogue between a Priest and a Dying Man, a selection of his letters, a fifty-page chronology of his life, two important essays on Sade, and a bibliography of his work.