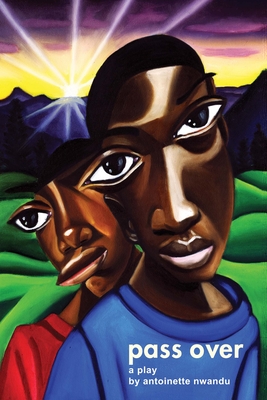 By  Antoinette Nwandu
Paperback
$ 16.00
Likely On Our Shelves

Moses and Kitch stand around on the corner--talking shit, passing the time, and hoping that maybe today will be different. As they dream of their promised land, a stranger wanders into their space with his own agenda and derails their plans. Emotional and lyrical, Pass Over crafts everyday profanities into poetic and humorous riffs, exposing the unquestionable human spirit of young men stuck in a cycle that they are desperately trying to escape. Spike Lee directed a film version of the play that premiered at the 2018 Sundance Film Festival and South by Southwest, and was produced by Amazon Studios. A provocative riff on the Book of Exodus and Waiting for Godot, Pass Over is a remarkable work of politically-charged theater by a bold new American voice.

A provocative riff on the Book of Exodus and Waiting for Godot, Pass Over is a remarkable work of politically-charged theater by a bold new American voice.

Antoinette Nwandu is a New York-based playwright and author of the plays Pass Over and Breach: a manifesto on race in america through the eyes of a black girl recovering from self-hate. Nwandu is a MacDowell Fellow, a Dramatists Guild Fellow, and an Ars Nova PlayGroup alum. Her honors include the Whiting Award for Drama, the Paula Vogel Playwriting Award, the Lorraine Hansberry Playwriting Award, the Negro Ensemble Company's Douglas Turner Ward Prize, and a Literary Fellowship at the Eugene O'Neill Playwrights Conference.