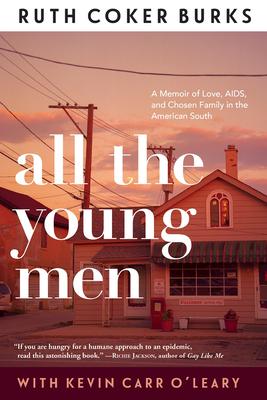 By  Ruth Coker Burks , Kevin Carr O'Leary
Hardcover
$ 26.00
Out of Stock In Store (Available to Order)

All The Young Men, a gripping and triumphant tale of human compassion, is the true story of Ruth Coker Burks, a young single mother in Hot Springs, Arkansas, who finds herself driven to the forefront of the AIDS crisis, and becoming a pivotal activist in America's fight against AIDS.

In 1986, 26-year old Ruth visits a friend at the hospital when she notices that the door to one of the hospital rooms is painted red. She witnesses nurses drawing straws to see who would tend to the patient inside, all of them reluctant to enter the room. Out of impulse, Ruth herself enters the quarantined space and immediately begins to care for the young man who cries for his mother in the last moments of his life. Before she can even process what she's done, word spreads in the community that Ruth is the only person willing to help these young men afflicted by AIDS, and is called upon to nurse them. As she forges deep friendships with the men she helps, she works tirelessly to find them housing and jobs, even searching for funeral homes willing to take their bodies - often in the middle of the night. She cooks meals for tens of people out of discarded food found in the dumpsters behind supermarkets, stores rare medications for her most urgent patients, teaches sex-ed to drag queens after hours at secret bars, and becomes a beacon of hope to an otherwise spurned group of ailing gay men on the fringes of a deeply conservative state.

Throughout the years, Ruth defies local pastors and nurses to help the men she cares for: Paul and Billy, Angel, Chip, Todd and Luke. Emboldened by the weight of their collective pain, she fervently advocates for their safety and visibility, ultimately advising Governor Bill Clinton on the national HIV-AIDS crisis.

This deeply moving and elegiac memoir honors the extraordinary life of Ruth Coker Burks and the beloved men who fought valiantly for their lives with AIDS during a most hostile and misinformed time in America.

Ruth Coker Burks was a young single mom in Hot Springs, Arkansas who cared for people with AIDS when no one else would in the 1980s and 1990s. With no medical background, Ruth single-handedly created a network of care, and saw to the final resting places of many men abandoned by families and neglected by medical professionals. For 30 years, Ruth has been an advocate for the LGBTQ community. She currently resides in Northwest Arkansas. In the summer of 1997, Kevin Carr O'Leary was 21 and a recent graduate of Wesleyan University when he started work at Poz, a landmark magazine about living with HIV. He has since co-wrote five New York Times non-fiction best sellers, including Strength in Stillness with Transcendental Meditation instructor Bob Roth, This Is Me with actress Chrissy Metz, and Open Book with singer Jessica Simpson. He lives in Brooklyn with his husband and two children.