When a Nation Forgets God: 7 Lessons We Must Learn from Nazi Germany 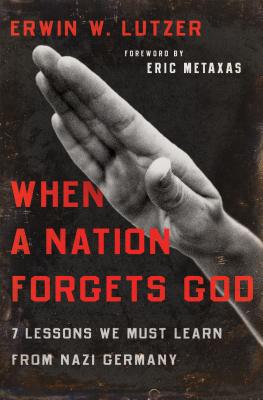 When a Nation Forgets God: 7 Lessons We Must Learn from Nazi Germany

This excellent book is so important. It clearly and powerfully explains what the parallels are between Germany's fall from grace and the beginning of our own fall. - Eric Metaxas, author of Bonhoeffer: Pastor, Martyr, Prophet, Spy

In When A Nation Forgets God, Erwin Lutzer studies seven similarities between Nazi Germany and America today—some of them chilling—and cautions us to respond accordingly. Engaging, well-researched, and easy to understand, Lutzer’s writing is that of a realist, one alarmed but unafraid. Amidst describing the messes of our nation’s government, economy, legal pitfalls, propaganda, and more, Lutzer points to the God who always has a plan.

At the beginning of the twentieth Century, Nazi Germany didn’t look like a country on the brink of world-shaking terrors. It looked like America today. When a Nation Forgets God uses history to warn us of a future that none of us wants to see. It urges us to be ordinary heroes who speak up and take action.

DR. ERWIN W. LUTZER is Pastor Emeritus of The Moody Church in Chicago where he served as the Senior Pastor for 36 years. A renowned theologian, Dr. Lutzer earned his BTh from Winnipeg Bible College, a ThM from Dallas Theological Seminary, a MA in philosophy from Loyola University, and an honorary LL.D. from the Simon Greenleaf School of Law. He is an award-winning author and the featured speaker on three radio programs that can be heard on more than 1000 outlets in the United States and around the world. Dr. Lutzer and his wife, Rebecca, live in the Chicago area and have three grown children and eight grandchildren.