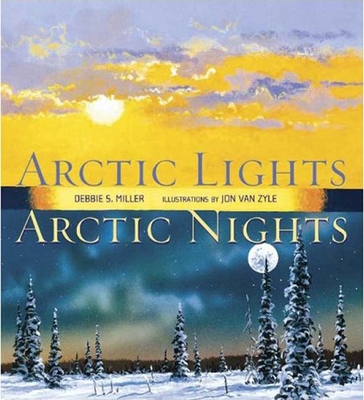 By  Debbie S. Miller , Illustrated By  Jon Van Zyle
$ 8.99
Out of Stock In Store (Available to Order)

Imagine a land where the sun rises at 1:58 a.m. in the summer and shines for less than four hours on a winter's day. The animals in the wilderness near Fairbanks, Alaska, witness some of the world's greatest temperature extremes and light variations ever year. At an average low of -16 degrees Fahrenheit, the winters may be unpleasantly frigid, but the light shows are always glorious!

DEBBIE S. MILLER has written many acclaimed children's books, including The Great Serum Race which was a NCTE Orbis Pictus Award Recommended book and was a CBC-NCSS Notable Social Studies Trade Books for Young People. She lives in Fairbanks, Alaska.
www.debbiemilleralaska.com

JON VAN ZYLE is a noted children's book illustrator and the official artist of the Iditarod Sled Dog Race. He has twice participated in the run and was recently inducted into the Iditarod Hall of Fame. Jon lives with his wife, Jona, and their Siberian huskies in Eagle River, Alaska. This is the eighth book Jon and Debbie Miller have collaborated on.
www.jonvanzyle.com