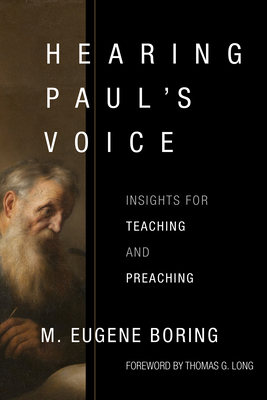 Exegetical soundings in Pauline texts, illustrated by probes into 1 Thessalonians, Romans, Ephesians, and the Pastorals.

Until we grasp the meaning of the text on its terms, Scripture is little more than a sounding board echoing the religious interpretations readers, all the while supposing this is "what the Bible says."

Gene Boring offers those who preach and teach methods of understanding Scripture contextually in Hearing Paul's Voice. He begins by placing the reader in the position of a first-century believer, demonstrating how such a reader would understand the church and the letter we now call 1 Thessalonians. Our own culture, combined with familiarity of the Bible and church life, has conditioned us to suppose we already understand what the Thessalonian believer had to learn. Hearing the Bible through ears of a Thessalonians opens up the possibility of hearing it afresh in our own time. Boring also explores how Paul's message was interpreted and heard in later generations. The theme throughout is coming within hearing distance of the text, for those whose ears may have been numbed by cultural familiarity.

Hearing Paul's Voice combines careful and reverent critical historical study of the Bible, assuming its results, with theological perception and openness to hearing the Bible as Word of God. Written with clarity and simplicity, Boring illustrates the relevance of the biblical text and is ideal for preachers and teachers in the church who want to deepen their understanding of the canonical Pauline letters.

M. Eugene Boring (PhD, Vanderbilt University), before retiring, was the I. Wylie and Elizabeth M. Briscoe Professor of New Testament at Brite Divinity School, Texas Christian University. He is the author of several books, including a commentary on Revelation and (with Fred Craddock) The People's New Testament Commentary. He lives in Fort Worth, Texas.