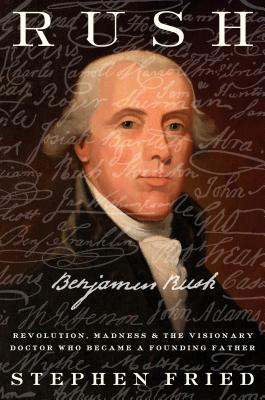 The monumental life of Benjamin Rush, medical pioneer and one of our most provocative and unsung Founding Fathers

By the time he was thirty, Dr. Benjamin Rush had signed the Declaration of Independence, edited Common Sense, toured Europe as Benjamin Franklin’s protégé, and become John Adams’s confidant, and was soon to be appointed Washington’s surgeon general. And as with the greatest Revolutionary minds, Rush was only just beginning his role in 1776 in the American experiment. As the new republic coalesced, he became a visionary writer and reformer; a medical pioneer whose insights and reforms revolutionized the treatment of mental illness; an opponent of slavery and prejudice by race, religion, or gender; an adviser to, and often the physician of, America’s first leaders; and “the American Hippocrates.” Rush reveals his singular life and towering legacy, installing him in the pantheon of our wisest and boldest Founding Fathers.

“Entertaining . . . Benjamin Rush has been undeservedly forgotten. In medicine . . . [and] as a political thinker, he was brilliant.”—The New Yorker

“Superb . . . reminds us eloquently, abundantly, what a brilliant, original man Benjamin Rush was, and how his contributions to . . . the United States continue to bless us all.”—The Philadelphia Inquirer

“An amazing life and a fascinating book.”—CBS This Morning

“Fried makes the case, in this comprehensive and fascinating biography, that renaissance man Benjamin Rush merits more attention. . . . Fried portrays Rush as a complex, flawed person and not just a list of accomplishments; . . . a testament to the authorial thoroughness and insight that will keep readers engaged until the last page.”—Publishers Weekly (starred review)

“[An] extraordinary and underappreciated man is reinstated to his rightful place in the canon of civilizational advancement in Rush. . . . Had I read Fried’s Rush before the year’s end, it would have crowned my favorite books of 2018 . . . [a] superb biography.”—Brain Pickings

STEPHEN FRIED is an award-winning journalist and New York Times bestselling author who teaches at Columbia University Graduate School of Journalism and the University of Pennsylvania. He is, most recently, the author of the historical biography Appetite for America, and the coauthor, with Congressman Patrick Kennedy, of A Common Struggle. His earlier books include the biography Thing of Beauty: The Tragedy of Supermodel Gia and the investigative books Bitter Pills and The New Rabbi. A two-time winner of the National Magazine Award, Fried has written frequently for Vanity Fair, GQ, The Washington Post Magazine, Rolling Stone, Glamour, and Philadelphia Magazine. He lives in Philadelphia with his wife, author Diane Ayres.