Black Flags: The Rise of ISIS 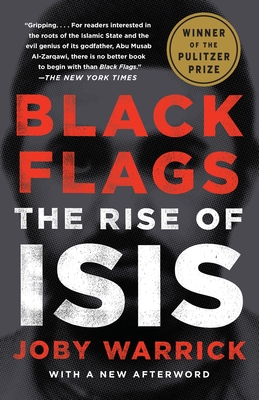 Black Flags: The Rise of ISIS

WINNER OF THE PULITZER PRIZE • In a thrilling dramatic narrative, the award-winning reporter traces how the strain of militant Islam behind ISIS first arose in a remote Jordanian prison and spread with the unwitting aid of two American presidents. With a new Afterword

Drawing on unique high-level access to CIA and Jordanian sources, Warrick weaves gripping, moment-by-moment operational details with the perspectives of diplomats and spies, generals and heads of state, many of whom foresaw a menace worse than al Qaeda and tried desperately to stop it. Black Flags is a brilliant and definitive history that reveals the long arc of today’s most dangerous extremist threat.

JOBY WARRICK has been a reporter for The Washington Post since 1996. He has twice won the Pulitzer Prize, for journalism and for his book Black Flags: The Rise of Isis. He is also the author of The Triple Agent.