Hamas Contained: The Rise and Pacification of Palestinian Resistance (Stanford Studies in Middle Eastern and Islamic Societies and) 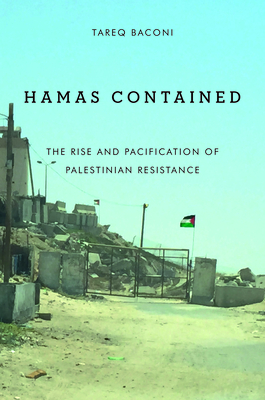 Hamas Contained: The Rise and Pacification of Palestinian Resistance (Stanford Studies in Middle Eastern and Islamic Societies and)

Hamas rules Gaza and the lives of the two million Palestinians who live there. Demonized in media and policy debates, various accusations and critical assumptions have been used to justify extreme military action against Hamas. The reality of Hamas is, of course, far more complex. Neither a democratic political party nor a terrorist group, Hamas is a multifaceted liberation organization, one rooted in the nationalist claims of the Palestinian people.

Hamas Contained offers the first history of the group on its own terms. Drawing on interviews with organization leaders, as well as publications from the group, Tareq Baconi maps Hamas's thirty-year transition from fringe military resistance towards governance. He breaks new ground in questioning the conventional understanding of Hamas and shows how the movement's ideology ultimately threatens the Palestinian struggle and, inadvertently, its own legitimacy.

Hamas's reliance on armed struggle as a means of liberation has failed in the face of a relentless occupation designed to fragment the Palestinian people. As Baconi argues, under Israel's approach of managing rather than resolving the conflict, Hamas's demand for Palestinian sovereignty has effectively been neutralized by its containment in Gaza. This dynamic has perpetuated a deadlock characterized by its brutality--and one that has made permissible the collective punishment of millions of Palestinian civilians.

Tareq Baconi is a Visiting Scholar at Columbia University's Middle East Institute and a Visiting Fellow at the European Council on Foreign Relations. He received his PhD from Kings College London. His writings have appeared in The Nation, Foreign Affairs, and The Guardian, and he has provided commentary on Middle East affairs to National Public Radio, Democracy Now, and Al Jazeera.