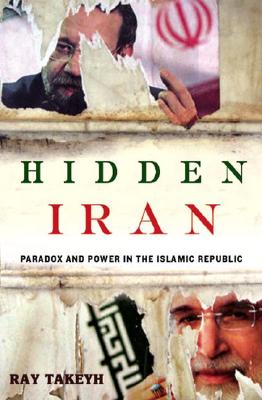 A leading expert explains why we fail to understand Iran and offers a new strategy for redefining this crucial relationship
For more than a quarter of a century, few countries have been as resistant to American influence or understanding as Iran. The United States and Iran have long eyed each other with suspicion, all too eager to jump to conclusions and slam the door. What gets lost along the way is a sense of what is actually happening inside Iran and why it matters. With a new hard-line Iranian president making incendiary pronouncements and pressing for nuclear developments, the consequences of not understanding Iran have never been higher.
Ray Takeyh, a leading expert on Iran's politics and history, has written a groundbreaking book that demystifies the Iranian regime and shows how the fault lines of Iran's domestic politics serve to explain its behavior. In Hidden Iran, he explains why this country has so often confounded American expectations and why its outward hostility does not necessarily preclude the normalization of relations. Through a clearer understanding of the competing claims of Muslim theology, republican pragmatism, and factional competition, he offers a new paradigm for managing our relations with this rising power.

Ray Takeyh is a senior fellow at the Council on Foreign Relations, where he concentrates his work on Iran, Islamist movements, and Middle Eastern politics. He has held positions at the National Defense University, Yale, and Berkeley. His work has appeared in Foreign Affairs, Foreign Policy, The Washington Post, the Los Angeles Times, Financial Times, and the International Herald Tribune.

He lives in Washington, D.C.