The Duchess of Windsor: The Uncommon Life of Wallis Simpson 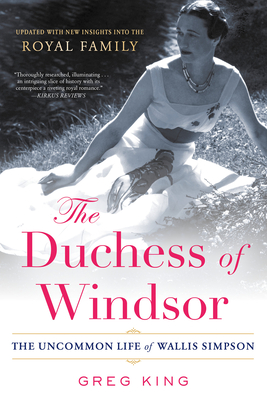 The Duchess of Windsor: The Uncommon Life of Wallis Simpson

NOW UPDATED WITH NEW INSIGHTS INTO THE ROYAL FAMILY

Long before the Duchess of Sussex, Meghan Markle, came the first scene-stealing American divorcée to win the heart of a British royal--and forever change the House of Windsor and the lineage of future kings . . .

"A woman's life can really be a succession of lives, each revolving around some emotionally compelling situation or challenge, and each marked off by some intense experience."

It was the love story of the century--the king and the commoner. In December 1936, King Edward VII abdicated the throne to marry "the woman I love," Wallis Warfield Simpson, a twice-divorced American who quickly became one of the twentieth century's most famous personalities, a figure of intrigue and mystery, both admired and reviled.

Wrongly blamed for the abdication crisis, Wallis suffered hostility from the Royal Family and much of the world. Yet interest in her story remains constant, resulting in a small library of biographies that convey a thinly veiled animosity toward their subject. The truth, however, is infinitely more fascinating . . .

"For a gallant spirit, there can never be defeat."

Using previously untapped sources, here is a complete and, for the first time, sympathetic portrait of the Duchess that reveals the woman behind the legend, from her birth in Pennsylvania during the Gilded Age to her death in Paris in 1986. King takes the reader through a world of privilege, palaces, and romance, politicians, dictators, and socialites--as well as feuds and lies--in a real-life fairy tale that bears striking similarities to the controversial decision by Prince Harry and Duchess of Sussex, Meghan Markle, to step back from their royal duties--in the name of love.

"One of the most perennial stories ever told." --Booklist

GREG KING, best known for his biographies of important historical figures, is the author of eighteen internationally published non-fiction books, including The Last Empress, The Resurrection of the Romanovs, The Court of the Last Tsar, and The Last Voyage of the Andrea Doria. A frequent onscreen expert and commentator for historical documentaries, his work has appeared in numerous publications including The Washington Post, Majesty Magazine, and Royalty Magazine. He lives in Everett, Washington