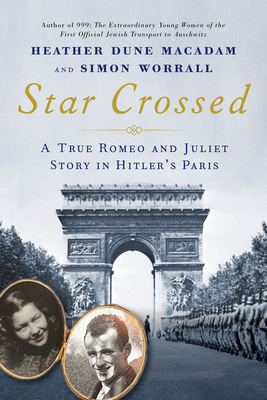 By  Heather Dune Macadam , Simon Worrall
$ 27.95
Pre-Order (Not Yet Published)

For readers of The Nightingale by Kristin Hannah who are hungry for a non-fiction account of Nazi-occupied Paris, Star Crossed is an epic true story of love and resistance during WWII from the award-winning author of 999. Part historical portrait of life during the Occupation, part valentine to The City of Light and the resilience of its people, this true love story follows the romance between the Romeo and Juliet of war-torn Paris – a Catholic Resistance fighter and a Holocaust victim who meet at the famous Café Flore before war, prejudice, and disapproving families set them on divergent and tragically inevitable paths.

Paris, 1940. The City of Light has fallen under German Occupation. Among patriotic Parisians, the pursuit of art, culture, and jazz have become bold acts of defiance. So has forbidden romance for talented and spirited Jewish teenager Annette Zelman, a student at the Beaux-Arts, and dashing young Catholic poet Jean Jausion. Despite their devout families’ vehement opposition, the young couple finds acceptance at the famed Café de Flore, whose habitues include Simone de Beauvoir, Jean-Paul Sartre, Pablo Picasso, Django Reinhardt, and other luminaries of the Latin Quarter’s creative world.

For a time, Annette and Jean feel they have eluded the brute might of the relentless Nazis -- and more immediately, their parents’ threats and demands. But as restrictions on the Jewish community escalate to arrests and deportations, the maleficent forces gathering around the young lovers set them on divergent and tragically inevitable paths.

Drawn from never-before-published family letters and other treasures, as well as archival sources and exclusive interviews, Star-Crossed offers us precious insight into the Holocaust and the lives French people bravely led under the Hitler regime. This breathtaking true story of beauty, art, liberation, and the transformative power of love resonates with an intimate story of undying devotion, seen through the prism of history.

HEATHER DUNE MACADAM is the author of the international bestseller and Pen Award Finalist 999: The Extraordinary Young Women of the First Official Transport to Auschwitz, translated into 18 languages, and the producer/director of its companion documentary film, 999. Her first book was the bestselling memoir Rena’s Promise: A Story of Sister in Auschwitz. A New York State Council of the Arts Fellow and recipient of a Society of Authors Research Grant, she is a board member of Cities of Peace: Auschwitz and the director and president of the Rena’s Promise Foundation. Her work in the battle against Holocaust denial have been recognized by Yad Vashem in the UK and Israel, the USC Shoah Foundation, the National Museum of Jewish History in Bratislava, Slovakia, and the Panstowe Museum of Auschwitz in Oswiecim, Poland. She and her partner, Simon Worrall, divide their time between East Hampton, New York, and Herefordshire, England. Please visit her online at www.heatherdune.com.


SIMON WORRALL is the author of two highly acclaimed books, The Poet and the Murderer (Dutton & Plume/Penguin Putnam USA, 2002; Fourth Estate UK), which William Styron called, “A gripping tale, done with great style and elegance…it held me in its spell from beginning to end,” and the novelized true story of his mother in World War II, The Very White of Love (HarperCollins, 2018). A Francophile since his Parisian childhood, Simon is fluent in French and speaks five other languages. He was the curator and interviewer for National Geographic’s “Book Talk” program for many years. He has been published in The Independent, The Guardian, The London Times, Marie Claire, GQ, and numerous other publications worldwide. His feature, “Emily Dickinson Goes To Las Vegas,” was the first piece of nonfiction ever published by George Plimpton in The Paris Review. Worrall is an experienced broadcaster, whose commentaries have aired on the BBC and NPR.